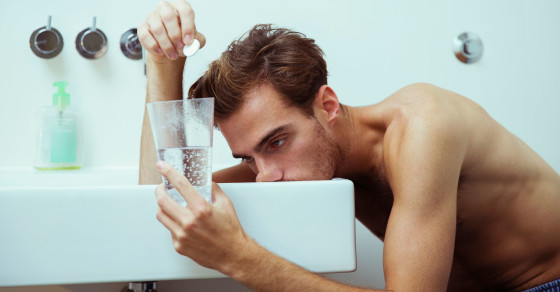 Everybody Gets Hangovers; Nobody Can Prevent Them
By Joshua A. Krisch

Everybody Gets Hangovers; Nobody Can Prevent Them

New study finds that the best way to prevent a hangover is... drinking less alcohol. Sorry.

Sobering news as we enter one of the last weekends of the summer: you can’t prevent hangovers. A new study presented at the European College of Neuropsychopharmacology suggests that all the methods conventionally proposed on how to avoid hangovers (including drinking lots of water) can’t prevent the soul-and-head-crushing sensation that signals you had one too many last night.

More How to Cure Your Hangover
​

There’s actually quite a bit of science behind hangovers. Researchers have identified a gene that may predispose some people to more frequent hangovers, and the effect that causes flushed, blotchy faces after drinking—and may be related to hangover intensity—also appears to have a genetic basis. But this study is one of the first to take on the conventional wisdom that we can, with the right tools, control our hangovers.

Researchers initially wanted to test the claim—often peddled at frat parties just before a keg stand—that some people are simply immune to hangovers. (Prior studies have shown that 25 to 30 percent of drinkers claim that they won’t suffer from hangovers no matter how much they drink.)

First, scientists surveyed nearly 800 Canadian students about their drinking habits over the past month and came up with an estimated Blood Alcohol Concentration for each student, based on weight, number of drinks and several other factors. They found that 79 percent of students who said they did not experience hangovers simply weren’t drinking enough to cause them. Those students consistently had blood alcohol levels hovering around 0.10 percent, the researchers found. That’s too much to drive—but not enough for a hangover.

“We found a pretty straight relationship,” said Joris Verster, professor at Utrecht University and coauthor of the study in a prepared statement. “The more you drink, the more likely you are to get a hangover.”

Then, in a separate study, Verster and his team tracked down roughly 800 Dutch students, quizzed them about their drinking habits, including whether or not they drank lots of water or ate a lot of food afterwards, and then asked them to rate their hangovers from “absent” to “extreme”. Based on the results, the researchers concluded that, once you’ve had too many shots, food and water are unlikely to prevent the inevitable hangover.

For those of us, however, who still want to drink wildly, chug some water and then show up at work the next day feeling fine, Verster has a sobering scientific message: “From what we know from the surveys so far, the only practical way to avoid a hangover is to drink less alcohol.” What a buzz-kill.