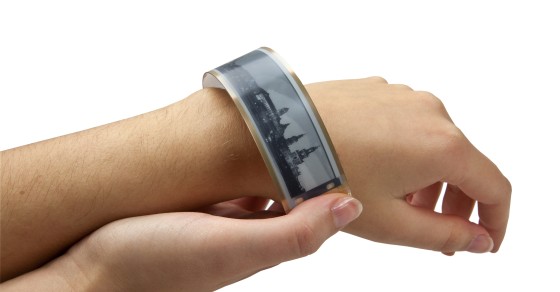 Flexible Technology, Now Brought To You By The Defense Department
By John Knefel

Flexible Technology, Now Brought To You By The Defense Department

The U.S. government wants the next generation of flexible screens and stretchable computer sensors to be built in the United States, and Secretary of Defense Ash Carter is the man leading the charge.

During a speech on Friday in Silicon Valley, his second in five months, Carter will unveil a new public-private partnership intended to accelerate the development of a domestic manufacturing base for the cutting edge technology.

Flexible technology already exists. Slightly bendable phones are one example; Fitbit bracelets are another, though judging by what some experts are predicting for the field, they could one day look as out of date as Zack Morris’ shoe-sized cell phone. One researcher, somewhat terrifyingly, is already working on developing a temporary tattoo-like sensor that alerts your phone to any changes in your health. Other developers are looking into creating “stretchable” displays for tablets.

In the military context, the uses for flex tech are virtually boundless. New advances could lessen the load soldiers carry by replacing rigid health monitors with wearable screens that wrap around a person’s arm like a sleeve. Stretchable computer sensors could also increase the spying capabilities of stealth bombers by allowing manufacturers to wrap sensors around the plane’s outside shell.

Think of the process as printing ultra-thin computer bits onto fabric. “This allows [the technology] to conform to various shapes and form factors such as contours of the human body or curved surfaces that can move,” says Subramanian Iyer, an electrical engineering professor at UCLA. “Think of it as a smart bandaid that you can put on, or clothes that have electronics built-in, but not rigid.”

The project is led by FlexTech Alliance, a consortium that includes 162 members, including household names like Apple and Lockheed Martin, universities like Stanford and MIT, and the military. The contract—which totals $171 million of combined government and private funding—will be overseen by the Air Force’s Research Laboratory.

Speaking at an event in Silicon Valley on Friday, Secretary of Defense Ash Carter will portray the new private-public partnership as mutually beneficial for the military and the tech sector. “That’s why I’ve been pushing the Pentagon to think outside our five-sided box, and invest in innovation here in Silicon Valley and in tech communities across the country. And now we’re taking another step forward,” Carter will say, according to an advance copy of his remarks provided to Defense One.

Although military spending certainly creates jobs in the US, one study found government spending in other areas—all of which would benefit from developing flex tech—is more productive than military spending, economically speaking. “Spending on personal consumption, health care, education, mass transit, and construction for home weatherization and infrastructure repair all create more jobs per $1 billon in expenditures relative to military spending,” conclude the authors of a 2007 University of Massachussets report.

Still, the military has long been an engine of technological innovation in the US. Iyer, the UCLA professor, thinks that developing a manufacturing infrastructure for flex tech in the US will have positive ramifications beyond military uses. He expects “a vary large spin off in smart fabrics for wearable computing and ubiquitous medical, health and quality of life applications in the general arena.” In the age of the Internet of Things—the phrase to describe ubiquitous digital communication between ordinary devices—he thinks we could be in for a revolution. “So I think this is quite important and I am glad we are doing it.”