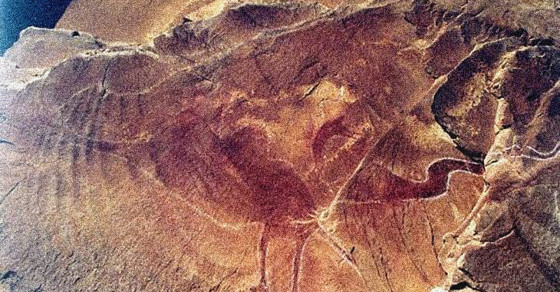 Scientists Just Debunked One Of Creationists’ Favorite Cave Paintings
By Joshua A. Krisch

Creationists think this cave painting is ancient proof that dinosaurs lived alongside humans. It's not. 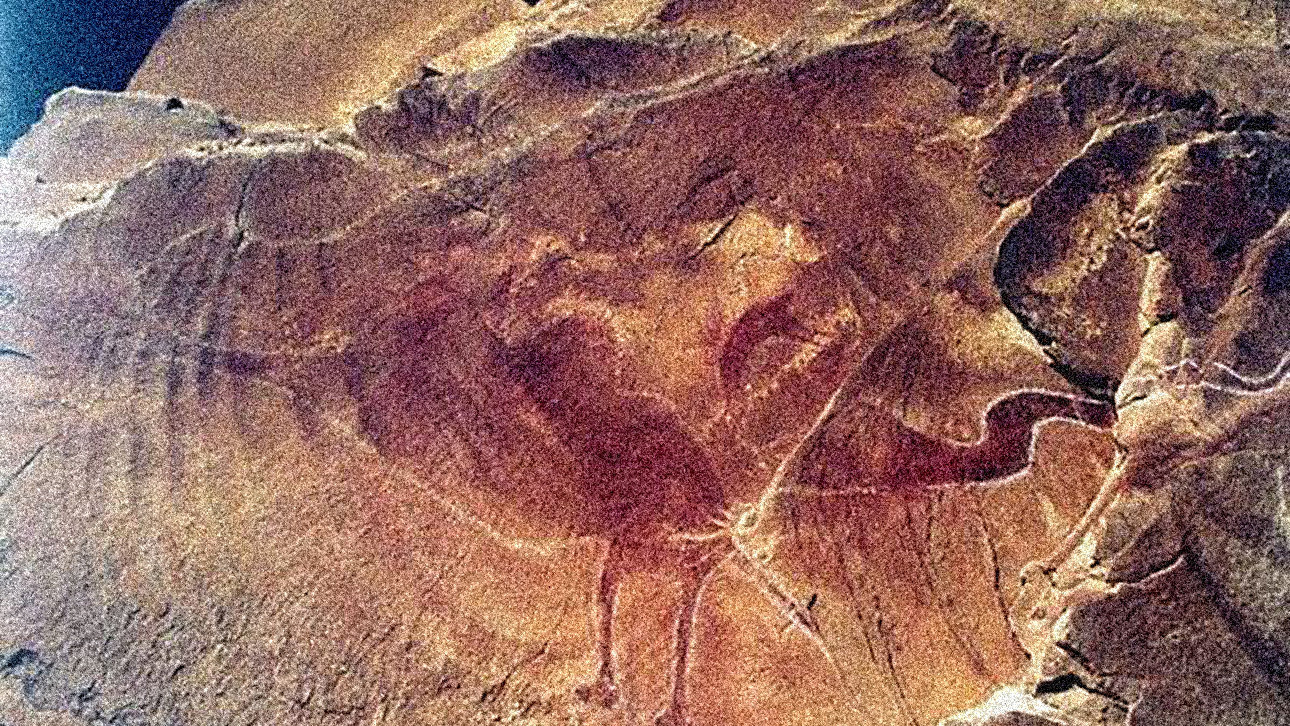 Along the sloping walls of the Black Dragon Canyon in Utah, there’s a curious rock painting that looks remarkably like a flying dinosaur. Creationists say it’s proof that humans and pterodactyls once coexisted. But now, in a paper published in the journal Antiquity, archaeologists have revealed that the “dinosaur” is actually a time-worn depiction of humans, a snake and some sheep.

“What was supposed to be one wing of this pterodactyl is actually two little four-legged animals,” Paul Bahn, a freelance archaeologist and coauthor of the paper, told Live Science. “The so-called head and beak and neck of the pterodactyl [are] actually a human figure, with its spindly legs and its two arms stretching out.” Here’s a visualization of how that works:

Cave paintings can be confusing, especially when the ancient etchings are exposed to the elements. Scientists say these particular masterpieces were painted onto the canyon walls by members of the Fremont culture roughly 1,000 years ago. But after a millennium of scorching Utah sun and the occasional desert downpour, the paint began to run and fade.

And that’s when human imagination took over. Amateurs first described the rock art in 1928, and outlined it in chalk (defacing the ancient art in that way is now illegal) to suggest the shape of a lopsided bird-like creature. But when one geologist later described the chalky outline as depicting a sort of flying reptile, or pterosaur, creationists seized the opportunity.

Young-Earth Creationists believe that the planet is barely 10,000 years old; some claim that dinosaurs first appeared on the Fifth Day of Creation (along with all other land animals) and boarded Noah’s Ark before The Flood. The Creationist website TruthInGenesis.com defends that position, adding that dinosaurs went extinct quite recently and that medieval tales of dragons are in fact crude descriptions of dinosaurs and pterosaurs. For some Young Earth Creationists, the rock art at Black Dragon Canyon became a rallying point—scientific proof that humans once saw (and tried to depict) dinosaurs.

But even thirty years ago, scientists had their doubts. “It was obvious to any professional archaeologist that chalking an outline on the motifs, which is frankly a kind of vandalism, had completely misinterpreted the panel,” David Whitley, an expert on rock art who was not involved in the study, told Science Magazine. In fact, archaeologists were fairly certain that they were looking at not one pterosaur but several agrarian figures, smudged together over time. And that made sense—Fremont rock paintings traditionally include single, long figures surrounded by smaller “attendants” such as humans, sheep and birds.

Still, nobody could prove it, and the loud minority of Creationists was only getting louder. “It’s unfortunate that science has to keep fighting these battles,” Whitley told Science Magazine. “But because the painting continues to be used to promote nonscientific views of the world, it became necessary to demonstrate with complete clarity that those ideas are just wrong.”

Debunking the pterodactyl theory required two cutting-edge scientific tools: digital photographic enhancement and X-Ray fluorescence. Scientists first uploaded a photograph of the cave art to DStretch, a computer program that helps highlight the original pigments in rock art and remove pigments (like chalk) that may have been added later. Then, for good measure, the scientists also scanned the painting with X-ray fluorescence, which pinpointed the parts of the rock art that contained original paint before it faded and ran.

The result is clearly not a pterodactyl. Scientists think the painting shows one very tall, bug-eyed person facing a sheep and a dog, along with a smaller person leaning toward a large, horned serpent. Although this doesn’t make much more sense than the pterodactyl, it conforms nicely with a large body of equally confusing Fremont rock art. Ancient people drew strange stuff.

“Since Native American art is of spiritual significance and holds significant religious content, images can also depict magical and mythical subject matter,” Benjamin Smith, a professor of rock art at the University of Western Australia told Live Science. “Not all animals in Native American art therefore need to depict real-world creatures. Some will be supernatural, but none will be dinosaurs.” Good luck explaining that to the Creationists.