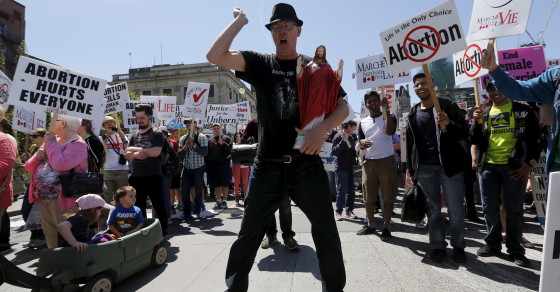 What Will Happen To Texas If This Abortion Law Is Passed

The Supreme Court is expected to decide in November whether it will review HB2, the Texas law that would make it harder for women seeking abortions

Texan women looking to get an abortion will be in for some sticker shock if the Supreme Court upholds a bill that puts restrictions on clinics.

The cost of an abortion in Texas would be $701 on average, which is an increase of 15 percent from the in-state price of a procedure at eight weeks’ gestation, if the Supreme Court decides not to review a law that would impose strict requirements on abortion clinics, The New York Times calculated. That price tag includes a state-mandated ultrasound and counseling, as well as travel, but does not account for other costs such as lost wages or childcare.

The distance Texan women would have to commute to obtain an abortion would skyrocket, especially for those located in the western part of the state. The number of abortion clinics in Texas has already plummeted from 62 in 2011 to 18 in 2015. The average county is 111 miles from the nearest clinic, an increase of 72 miles in 2012, the Times reported. The nearest abortion clinic to El Paso, a city with over 800,000 people, would be 545 miles, which comes out to a nine-hour drive.

The question at hand is whether HB2, which requires clinics to meet ambulatory surgical enter standards and for physicians to have admitting privileges at a local hospital, presents an “undue burden” on women’s rights. The Supreme Court ruled in late June to put on hold the enforcement of HB2 after abortion rights groups requested an emergency stay to the Fifth Circuit’s ruling, and it is expected to say whether it will decide to formally review the law in November.

The Fifth Circuit panel had found in early June that only 17 percent of women in Texas would have to travel 150 miles or more, a rate that was not high enough for it to be billed an “undue burden.” The Supreme Court says that “a large fraction of relevant cases” have to be affected in order for there to be an “undue burden.”

A panel in the same federal appeals court ruled that it was unconstitutional for Mississippi to close its one abortion clinic under restrictions very similar to Texas’ HB2, according to a New York Times article published in June. Mississippi women would have to travel to other states to get an abortion, and one state does not have the constitutional right to delegate rights to other states.