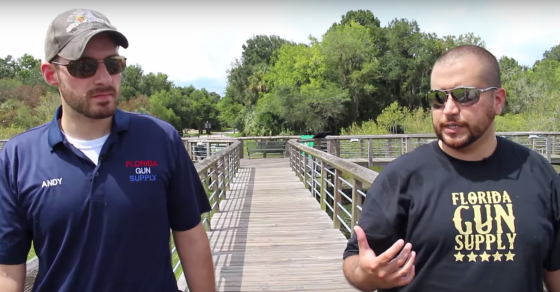 George Zimmerman and the "Muslim-free zone" guy paired up to sell Confederate flat prints, money which their charity recipient of choice promptly rejected

George Zimmerman is painting Confederate flags and selling them online to raise money for Andy Hallinan, who was sued for declaring his Florida gun store a “Muslim-free zone.” Here’s the best part: The partners said that a portion of the money they raised from selling the Confederate flag prints would go to the Boys and Girls Clubs of America (BGCA), which promptly issued a cease-and-desist order for the Florida gun store using its name.

Central Florida gun shop owner Hallinan and his new buddy Zimmerman, who was acquitted of second-degree murder charges in 2013 after fatally shooting black teen Trayvon Martin, put a number of prints up for sale of a Confederate flag painting drawn by Zimmerman. They have promised that Zimmerman has personally signed each of the prints. The two men claimed they would allot some of the money they raised from the Confederate flag prints to the BGCA, an offer the organization rejected.

“A news story has reported that a Florida-based gun store owner is selling prints of the Confederate Flag created by George Zimmerman, with proceeds being given to the Boys & Girls Clubs.  Boys & Girls Clubs of America (BGCA) and its local affiliates have no knowledge of this plan, were not approached about and did not approve the use of their name, and have issued a cease-and-desist order to the owner,” the BGCA said in an official statement sent by email to Vocativ.

Zimmerman was in the middle of drawing an American flag when he heard about the backlash against Hallinan’s ban of Muslims from his store, the gun store website says. The Council on American-Islamic Relations (CAIR) filed a federal lawsuit in late July against Hallinan for declaring his gun shop a “Muslim-free zone.”

“George started painting an American flag on this canvas, but heard about Andy getting sued by CAIR (the Counsel for American/Islamic Relations) while he was working on the painting. George decided to scrap the original American flag painting and repaint it with a Confederate (Battle) flag,” the ad on Florida Gun Supply website’s says. Each print says, “The 2nd protects our 1st,” which Zimmerman said is a “double entendre.”

Zimmerman connected with Hallinan through the idea that “the media twists the truth” about them, according to a 10-minute online documentary about their new kinship. On the Florida Gun Supply site, the men reacted sorely to the news that their association with the BGCA would be rejected: “We said in the video we would give a portion of the proceeds to the Boys and Girls Club, but they then told me they didn’t want me to use their name in my video. We were just trying to support them!”