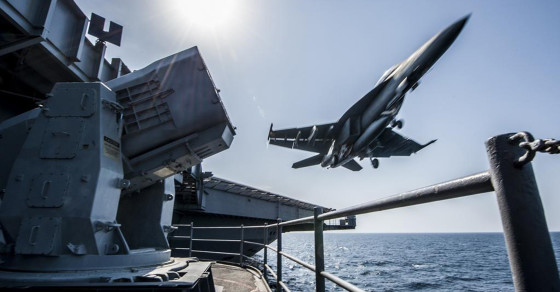 U.S. Airstrikes Against ISIS In Iraq And Syria Surge To Record Levels
By Shane Dixon Kavanaugh

U.S. Airstrikes Against ISIS In Iraq And Syria Surge To Record Levels

Aircraft dropped more bombs and missiles on ISIS targets in July than any other month in the year-long conflict, U.S. military statistics show

The United States-led airstrikes against the Islamic State in Iraq and Syria surged to record levels in July, signaling an unprecedented escalation by coalition forces during its year-long conflict with the militant group.

Throughout the month, drones and warplanes deployed 2,828 weapons against ISIS targets, according to new figures released by the U.S. Air Forces Central Command. That is a 66 percent increase in the number of bombs and missiles fired at the militant group’s targets in June, and even 22 percent more than the 2,038 used in January, when the coalition unleashed a fusillade of firepower in an effort to drive ISIS out of the Syrian city of Kobani.

The recent increase in air power comes as the U.S. and its allies continue to struggle in their attempts to crush the terror group. In July, drones and fighter jets launched repeated airstrikes against targets in Mosul, Ramadi, Raqqa and Hasaka, among other cities in Iraq and Syria, according to detailed press releases issued by U.S. Central Command. The airstrikes, however, have yet to wrest these strategic strongholds out from under ISIS control.

Vocativ reached out to the U.S. Department of Defense, Combined Joint Task Force and Air Force Central Command about the surge in airstrikes, but did not receive comment.

Airwars, a British-based monitoring group, estimates that the U.S. coalition has conducted nearly 6,200 airstrikes targeting the Islamic State since August of last year. The group estimates that at least 15,000 ISIS fighters and 489 civilians have been killed in the bombings.