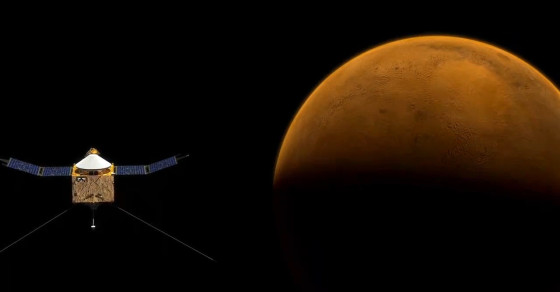 Junk Science: The Annual Mars Hoax Is Still Just A Hoax
By Joshua A. Krisch

The Mars Hoax is as much a staple of summer journalism as terrifying shark attacks, California wildfires and Confederate summer camps (okay, that one is just us). Every August, someone either cruel or gullible recirculates an old email from the early 2000s, claiming that by the end of the month Mars will move so close to planet Earth that it will appear as large as the moon in the night sky.

The Mars Hoax did have some truth to it back in August 2003, when the Red Planet swung by about four times closer than usual. The healthy 140 million mile gap between Earth and Mars narrowed to a still-respectable 34.8 million miles, and Mars glowed more brilliantly in the night sky than it had for 60,000 years. Nonetheless, to the naked eye it simply looked like a large, reddish star.

More Why the Hell Does Max Fagin Want to Die on Mars?
​

If that happened, Mars—at roughly double the distance but also twice the diameter and eight times the mass of the moon—would probably function a lot like a second moon (consider the fact that, if our own moon doubled in diameter but travelled twice the distance from Earth, not a whole lot would change). But having two large moons would be really, really bad.

Tides would be crazy. As Mars approached Earth, we would run in panic from tsunamis, earthquakes and volcanic eruptions. In this one regard, the Mars Hoax got it right—it would be a truly spectacular, once-in-a-lifetime experience. But as ash and chemicals pelted our planet, it would likely also be a life-ending experience. Mass extinctions would be inevitable. Even once Earth calmed down and the few survivalists in Oklahoma emerged unscathed, coastal living would be a nightmare—there would be differences of thousands of feet between high and low tides. Survivors would be forced to move inland.

Not that any of this matters, because it’s never going to happen. Mars is more-or-less staying put, incredibly far away from our humble blue planet and the annual Mars Hoax is just that—an annual hoax that we can’t wait to debunk again and again every summer. But for those of you who are tired of trying to debunk the Mars Hoax with numbers and science, here’s a handy visualization that captures the impossibility of a truly close encounter with the Red Planet.