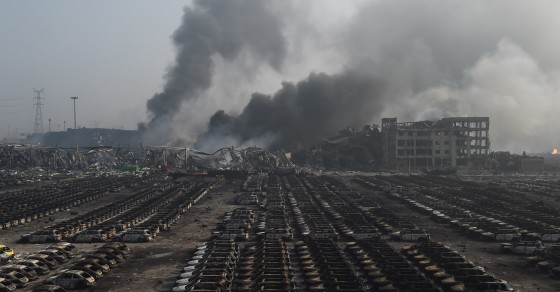 People up to 20 miles away from the site of the chemical explosions that devastated the Chinese port city of Tianjin could be in danger from the fallout.

“People within the first couple of miles [surrounding the blast] could be severely endangered from poisonous gas,” says Rick Hind, legislative director of Greenpeace’s toxics campaign. Investigators have set up 12 air-quality monitoring stations that have shown levels of toluene, used in solvents and gas to improve octane ratings, that surpass the national standard. Prolonged exposure to the chemical can harm the central nervous system or respiratory system.

“It would be harmful if you breathe in [this toxic air] for a long time,” Wen Wurui, the head of Tianjin’s environmental protection bureau, told the BBC. “But at present, it has not exceeded [the standard] too much based on our monitoring.”

Hind says the bigger risk in the world’s 10th-largest port—beyond airborne chemicals—are any other petrochemicals being stored and transported in the area. “The first mile or two is key. As we saw in video, whole buildings collapsed a mile away. If there was another tank of poisonous gas, like chlorine, then more people could be at risk.

“For example, (the chemicals from) one railcar of chlorine could drift and be dangerous for 14 to 20 miles. An industrial area like this could be a very diverse mixture of different types of materials. People in the area who have the option to leave probably should.”

The blasts Wednesday killed at least 50 people and injured hundreds more. The force of the explosions blew out buidlings, turned cars into hunks of charred metal, and set off towering fires. Residents across the city of 12 million felt the ground shaking from the blasts, the cause of which is still unknown.

China’s Public Security Minister Guo Shengkun visited the blast site Thursday morning. “Deep lessons must be learned,” said Guo, who expressed concern for rescue soldiers and stressed the “absolute necessity” of preventing more accidents by inspecting how dangerous chemicals are handled. The initial blast originated in shipping containers in a warehouse owned by Ruihai Logistics, one of several companies that handle hazardous chemicals at the port.

Taking immediate stock of chemicals in the area should be a priority to head off the possibility of additional explosions, according to Hind. Greenpeace Asia said in a statement that “hazardous chemicals stored by the company concerned include sodium cyanide (NaCN), toluene diisocyanate (TDI) and calcium carbide (CaC2), all of which pose direct threats to human health on contact. NaCN, in particular, is highly toxic. CaC2 and TDI react violently with water and reactive chemicals, with risk of explosion.” Rain was forecast for Tianjing, which could complicate the efforts to contain any remaining fires.

Hind says that In addition to checking what other chemicals are being stored in the area, investigators should also test the water, as the downstream pollution could ruin fisheries and drinking water. A team of 217 military toxic waste specialists were in the city as of Thursday night.