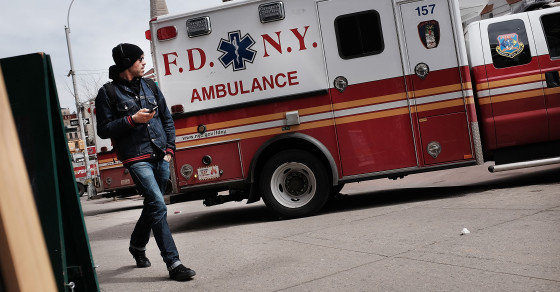 Here’s How Minorities Are Using Emergency Services
By Joshua A. Krisch

Hispanic men are least likely to call 9-11 if they or a loved one is suffering from a stroke, according to a new study published the Journal of the American Heart Association. The findings suggest minorities are reluctant to contact emergency medical services, even when they are in dire straits.

For the study, researchers examined 400,000 medical records of stroke patients, collected between 2011 and 2014. Half of the stroke patients reviewed were women; 69 percent were white, 19 percent were black, 8 percent were Hispanic and 3 percent were Asian. The records reveal that fewer Hispanic men arrive at the hospital via ambulance than any other cultural group. Statistics on stroke patients and ambulance services are pretty dismal to begin with, so even minor dips in the number of people who call 9-11 for early stroke care is cause for concern.

Consider the fact that even white women (the most compliant group when it comes to calling EMS) only take an ambulance to the hospital 62 percent of the time. Meanwhile, Hispanic men call the ambulance just 52 percent of the time—which means roughly half of all Hispanic stroke patients are delaying care until they get to the hospital. This may explain why, even as progress in stroke care has been made in leaps and bounds, outcomes for minorities after stroke are lagging way behind.

Here’s How Minorities Are Using EMS