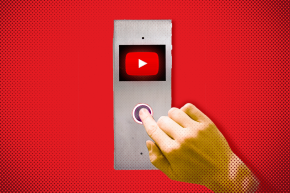 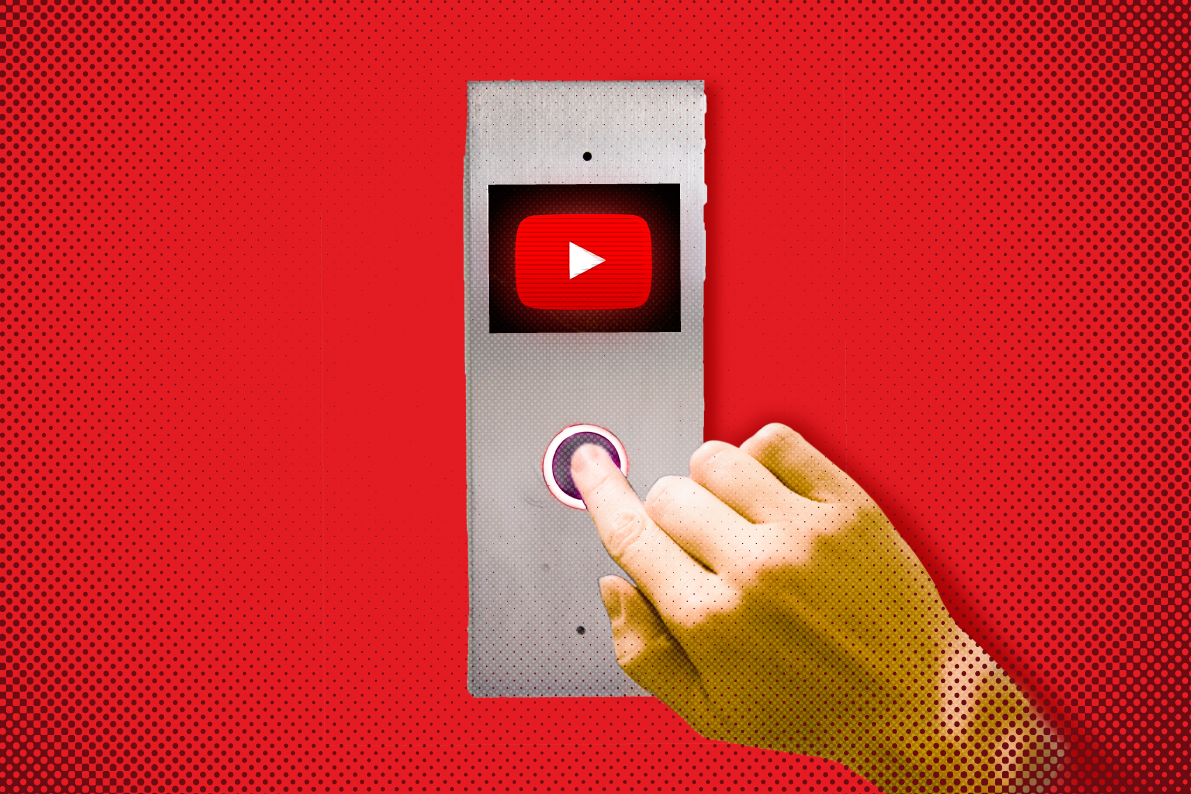 Andrew Reams is part of the YouTube elite. His personal channel boasts more than 82 million views, 41 of his videos have more than a quarter of a million views apiece, and to a world of kids and young adults, most of whom are on the autism spectrum, he is a superstar. The secret to his viral success? Elevators.

Reams, a friendly-faced and slightly balding 37-year-old, works the railroad as a freight conductor for Norfolk Southern Railway, but his true obsession is traveling the country, shooting video of elevators. In one of his top performing clips, from 2011, Reams films himself riding up and down a pair of glass elevators in Virginia while quietly narrating. “This is a really nice elevator,” he says. The five-and-a-half minute video has been viewed more than 600,000 times. His clips have made him internet-famous—and a host of real-life friends.

In the spare bedroom of his home in Roanoke, Virginia, Reams maintains a small elevator museum jammed with control panels, lights, recordings and a carousel of padlocks and keys. It’s frequented by visitors drawn from the sprawling elevator community on YouTube.  On the day we spoke, Reams is being visited by James Brock, a 23-year-old who drove ten hours north from Mississippi to visit Reams’ museum. But it’s not just a curiosity visit—Brock credits Reams with changing his life for the better.

“I was pretty lost,” he said. “I just don’t know where I’d be without Andrew.”

For Brock, like many others, Reams’ YouTube postings about elevators have connected him vast community who felt similarly isolated. “I thought I was the only one,” Brock told Vocativ. “Without Andrew and without these other people sharing the same interest, it just seems like it’d be more or less… I’d just have a more boring life,” says Brock, who now calls Reams a close friend.

“I mean, I thought I was the only person out there who enjoyed elevators, to be honest.”

I am having great reflections about today

“I’ve loved elevators ever since I was a little kid,” Reams tells Vocativ. “My first elevator ride took place in a shopping mall in Des Peres Missouri.” Googling “Des Peres Missouri elevator” returns a handful of videos. Reams stars in the first two. Ten years and 82 million views after he started filming, Reams’ YouTube channel is the center of a tiny, tight-knit universe of elevator-mad teens.

“I myself am autistic,” says Reams. “Not everybody that does these elevator [videos] is autistic but I would say at least 80 to 90 percent of them are.”

Elevators have a bunch of attributes which make them appealing to people with Autism Spectrum Disorder (ASD). Dr. Amanda Bennett, who works with autistic children at the Children’s Hospital of Philadelphia told Vocativ: “For people who have ASD, a core symptom is a difference in how they process sensory input.” Until 2013, doctors had focused on the sensory-avoiding aspect of ASD, but a recent change in diagnosis means doctors have started examining the other side of the coin. “For others, the sensory-seeking component [of ASD] means they seek out certain sounds, senses or feelings,” said Bennett. “In an elevator, the lighting is different, there are the noises the button makes, and the mechanical sounds of the elevator moving up and down in the elevator shaft.” She says all of those could contribute to making elevators so compulsively attractive to this group of people.

“These kids will [say] that all they want to do on their vacation is go to Roanoke to visit Andrew Reams and ride elevators” — Sasha Bailey, Thyssen Krupp Elevators

A large portion of Reams’ fans are boys in their early teens—drawn to elevators through autism in the same way. “Some of it has to do with the fact that they feel they have control over the elevator,” says Reams.

Reams fields a constant stream of calls and emails from parents of elevator-obsessed children to whom he is both a celebrity and role model, and he’s not alone. Sasha Bailey, who runs communications for elevator company Thyssen Krupp, is similarly inundated by calls from elevator fans, who call her department at all hours with requests for parts and information. Bailey’s personal number is online, and says some elevator-obsessed kids have no problem calling her in the middle of the night. “There has definitely been some boundary issues,” she says.

Her team has struggled to manage thousands of teenagers with a burning curiosity for the workings of elevators—heavy, complicated machinery that can be extremely dangerous.

“They go in and film these elevators and a lot of the times you’ll go in and see them doing things that are not safe. We want to make sure they stay out of machine rooms…so we started this club. You can sign up and get all this stuff that says ‘I’m a safety ambassador’ and the idea was to have them be the ambassadors of the message of keeping others safe on escalators and elevators—but it kind of gave them an outlet.”

Thyssen Krupp also co-opted Reams, who acts as a sort of proxy leader for the group. “These kids will [say] that all they want to do on their vacation is go to Roanoke to visit Andrew Reams and ride elevators,” says Bailey.

“When we were in New York with him three weeks ago … this teenager showed up at the restaurant where we were having lunch so he could just shake his hand and hug him. The kid rode the subway from Brooklyn to the financial district—he probably spent maybe 15 minutes with him.” One of Reams’ younger fans, who goes by “TJ Elevator Fan” has featured in a four-minute video ad for Hampton Inns, depicting his travels with his parents to seek out new elevators.

Pushing One Others’ Buttons

Having obsessive interests is a common trait of people with Autism Spectrum Disorder, with common focuses of their obsessions including trains, buses and a range of other mechanical objects. (Reams’ web mascot is a diesel locomotive).

Constantly riding elevators means they often run into elevator mechanics, who they then pepper with extremely technical questions. Superfans are also constantly trying to get their hands on elevator parts, specifically the keys which unlock elevator carriage control panels and other equipment.

“Elevator keys are a big deal with them,” says Bailey. “You can get them on all sorts of places, they’re easily accessible. They think that it’s really cool, but we have to say hey, you need to make sure that you’re not doing that.”

And while saving these kids from themselves is a major concern, this all-consuming obsession could be the saving grace.

Cultivating the obsessive interests of autistic teens can help them transition into a productive adulthood. Autism icon Dr. Temple Grandin, played in a biopic by actress Claire Danes, was famously obsessed with how cattle move as they are herded into slaughterhouses. Her obsession became a career–Grandin is now a professor of animal science at Colorado State University. She told Scientific American: “My obsession with cattle chutes turned into a successful career designing cattle handling facilities. I tell parents and teachers to tap into their child’s obsessions and special interests and use them to motivate.”

Dr. Bennett agrees, even if having a weird, quirky interest can make for awkward relationships with your peers in your teens and early teens. “If you have a strong interest in elevators and all you want to talk about is elevators, while the other kids want to talk about something else—that can be hard. But as an adult you may be designing the latest in elevator models. People who are this passionate about something can develop entire careers out of that passion. It’s up to parents to figure out how to make this interest relevant to their age.”

Grandin also stressed the importance for those with autism of getting out into the world and confronting what might be uncomfortable situations. Out of context, going to Roanoke to ride elevators with a 37-year-old train conductor you met on YouTube would seem, well, odd. But for someone with autism, such a leap into the real world could be immensely challenging—and healthy. Says Grandin: “There are too many kids with many different kinds of labels who are not learning basic skills. They do not know how to shake hands or order food in a restaurant.”

Grandin urges them, and their parents, to get out into the world, by whatever means works. And, bizarrely, a handful of folk sharing over-excited YouTube videos of elevators might be the best avenue available for them to ascend to ever greater things.

Even found some #otis #popout #buttons in #bristol #elevator