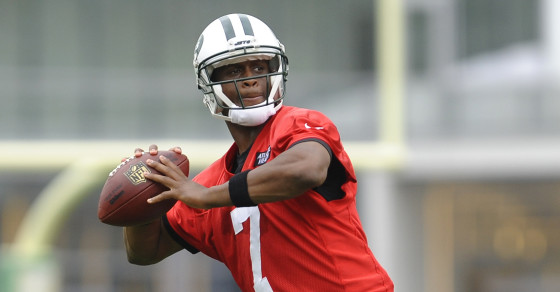 Without even playing a game, the Jets are in mid-season form and social media is enjoying every minute

“Gang Green” proved itself the NFL’s most comedic franchise Tuesday when Jets coach Todd Bowles announced that starting quarterback Geno Smith was sucker punched during a locker room fight and could miss up to 10 weeks.

The player who punched Smith, second-year linebacker I.K. Enemkpali, was immediately released from the team and it appeared that Bowles, who is in his first year coaching at the Jets, was finally forced to face the reality of his charges.

“You don’t walk up to another man and punch him in the face. It’s something you don’t tolerate. When you have a team and you have a bunch of side issues, you can’t tolerate that,” Bowles told reporters. “Our quarterback is out six to 10 weeks”

The Jets, who were 28th in the NFL in scoring last year, will now have to turn to NFL journeyman Ryan Fitzpatrick to lead their offense for at least the first few games of the season. Meanwhile, Geno took to Instagram to vow that he’d be back with a selfie.

But social media still lit up, with past and present NFL players reveling in yet another Jets calamity and fans collectively slapping their heads at the latest mishap. Vocativ compiled some of the best reactions.

Never in my life. Fights maybe, but sucker punched? Like I said punk move https://t.co/NuwLQIHlte

What is all this quarterback violence smh!