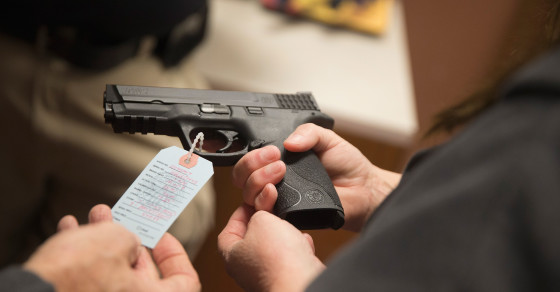 Seattle is implementing a $25 gun tax. The NRA are furious, but the same tax in Chicago saw gun sales rise

The NRA has claimed a new $25 firearm tax in Seattle will drive business out of the city but a similar tax introduced in Chicago has not affected gun sales, Vocativ has learned.

Cook County in Illinois, which covers much of Chicago, became the first county in the U.S. to introduce such a tax on April 1, 2013, but figures retrieved from the Cook County Government reveal taxes earned from gun sales are actually on the rise.

That represents about 38,000 guns legally purchased in Cook County in 2015, although a Cook County spokesperson said a portion of the revenues may have been collected from late payment fees and other fines.

Cook County Board President Toni Preckwinkle, who oversees the second most populous county in the U.S., introduced the tax in an effort to help fund the Cook County Health and Hospitals System. It costs roughly $52,000 to treat a gunshot victim at Stroger Hospital, the County’s flagship hospital—Chicago reported more than 2,500 shootings in 2014. Preckwinkle was forced to drop a five cents bullet tax, which forms part of a similar tax unanimously approved by the Seattle City Council on Monday.

Seattle City Council president Tim Burgess said the revenues from the gun violence tax will be spent on prevention programs and research intended to reduce the burden of gun violence on Seattle residents and neighborhoods.

A study on gun safety in Seattle found taxpayers footed $12 million (70 percent) of all direct medical costs from gunshot wounds in 2014. The City Budget Office estimated the gun violence tax will raise between $300,000 and $500,000 a year.