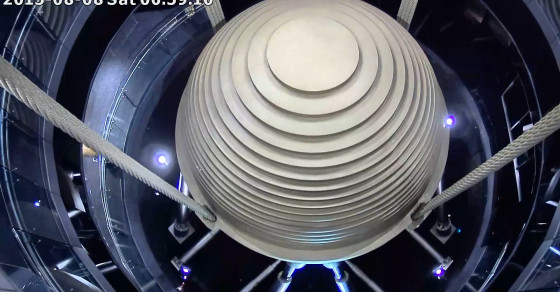 Taiwan's Tapei 101 is among the tallest man-made structures in the world. Here's how ingenious engineering saved the tower during last week's typhoon.

When Typhoon Soudelor raged off the coast of Taiwan early Saturday morning, widespread destruction was inevitable. But a single tower, one of the tallest in the world, escaped the storm unscathed. Tapei 101 survived.

The key to the 1,667-foot tower’s resilience is an 18-foot, 728-ton globe suspended between the 87th and 92nd floors. The globe functions as a tuned mass damper, which is sort of an enormous pendulum that counteracts the swaying motion of a building by shifting in the opposite direction. (In case that’s not clear, here’s a fun gif).

Most skyscrapers have dampers of some kind, but seldom do we get to see one in action. Here’s a video of Tapei 101 staring into the face of the storm, putting that mass damper to use: