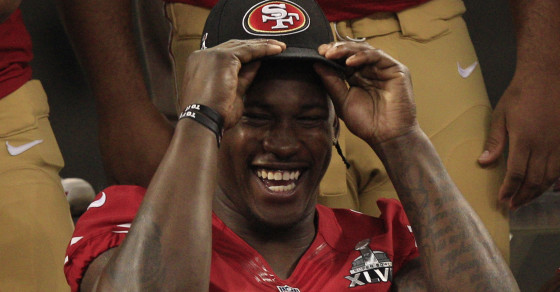 Repeat Offenders Give These NFL Teams The Highest Arrest Records

260 NFL players have been arrested in as many weeks

The Minnesota Vikings, Denver Broncos and Tampa Bay Buccaneers are the teams in the NFL with the most players arrested in the last five years—largely because of a select group of repeat offenders.

The Vikings lead the pack with 18 arrests, followed by 16 and 13 apiece for the Broncos and Buccaneers. The San Francisco 49ers, which placed fifth overall, cut pass-rusher Aldon Smith on Friday after he was arrested for a hit and run, DUI and vandalism in Santa Clara, California. His departure was a long time coming for many onlookers with Thursday’s arrest his fifth since 2012.

Smith is one of the worst repeat offenders in the NFL, but the Vikings had two repeat offenders, namely Jerome Simpson and Erin Henderson, both arrested twice before, as were the Broncos’ Von Miller and Elvis Dumervil, and the Buccaneers’ Cody Grimm and Eric Wright.

Miller, who was arrested twice in six weeks for careless driving, told 9News Denver regarding Smith’s latest arrest: “He’s in [the] same boat I was before. He was there for me, I’m going to be there for him.”

The only other 49ers player with more than one arrest in the last five years was former defensive end Ray McDonald, also released after being arrested three times since 2010, most recently on suspicion of assaulting his pregnant ex-fiancee last August.

Nearly 70 percent of NFL teams have had an arrest in the last two years, despite the NFL spending $750,000 annually on a four-day symposium aimed at teaching new draftees how to responsibly handle their newfound fame and fortune.

There have been 260 NFL player arrests over the last 260 weeks (5 years). New team-by-team arrest breakdown: pic.twitter.com/iNfgyUrzlf