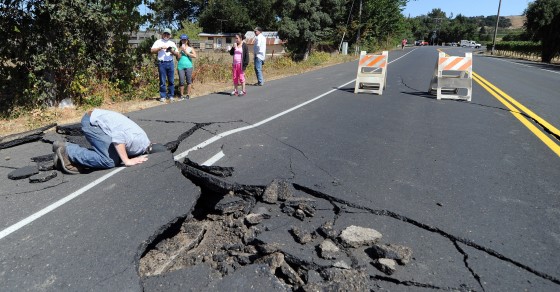 If You Live In These 10 States, There’s A Risk Of A Big Earthquake
By Jennings Brown

If You Live In These 10 States, There’s A Risk Of A Big Earthquake

Nearly half of Americans are living in areas that are at risk for earthquakes, according to a new U.S. Geological Survey report. And the new data shows that nearly twice as many Americans could be exposed to potentially damaging earthquakes as the USGS estimated in 2006.

More than 143 million people live in regions that could be affected by earthquakes within the next 50 years. Of those, about 57 million live in moderate-risk regions and 28 million live in high-risk regions. The new statistics are based on science advancements and population growth.

In descending order, the 10 states where the most people are in danger of being hit by an earthquake are California, Washington, Utah, Tennessee, Oregon, South Carolina, Nevada, Arkansas, Missouri and Illinois.