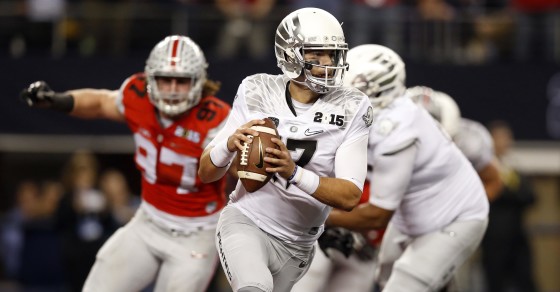 College Football Is A Game Of 1/10 Of An Inch

The average quarterback college recruit is getting juuuuust a bit taller

They say that football is a game of inches. In the case of college quarterbacks, it’s literally a game of 1/10 of an inch.

That’s exactly how much taller the average four- and five-star college quarterback recruit has become since 2002, according to a Vocativ analysis.

College Quarterbacks Are 1/10 Of An Inch Taller These Days

To find the recruits’ heights, Vocativ used data from rivals.com dating back to 2002, the earliest year for which the popular recruit tracking site has data. We then averaged each year’s combined heights. Over time, that average has increased by 1/10 inches, from 6 feet 3 inches in 2002 to 6 feet 3.1 inches in 2015.

The data set included 330 quarterbacks. Sixty-one of those quarterbacks did not have heights listed so we removed them from the set.

Since 2002 there have been ten QBs who’ve reached the dizzying heights of 6 feet 6 inches, the tallest on record, with several of them (Erik Ainge, Ryan Mallett, Cam Newton, etc.) going on to play in the NFL.

By the way, the shortest quarterback on record, Anthony Johnson at 5 feet 10 inches, committed to play for Alabama in 2002. If a brief Google search is any indication, he’s never been heard from again.