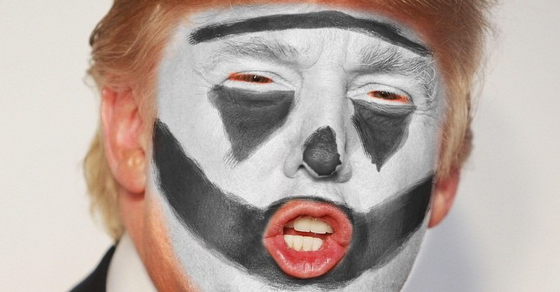 17 Famous People Who Look Even Better As Juggalos

It took someone who’s not plugged into the world of Insane Clown Posse to truly capture their spirit in raw and startling fashion, and to reveal the hidden Juggalo inside some of the most famous people in the media.

“I’ve heard the FBI classifies them as a gang,” Breck said, referring to the hip hop duo’s oft-maligned fan base. “I’ve heard that magnet song a couple of times.”

Upon further reflection, the self-described 30-something from Massachusetts (who declined to tell Vocativ his last name) added: “I think they just want to have fun and paint their faces.”

Unschooled in the nuances of the wicked clown community, Breck has, nevertheless, captured its essence.  He maintains the Instagram account juggalo4u, a menagerie of celebrities, politicians and B-list media personalities reimagined as full-fledged Juggalos.

Got that #bieberfever tho. #justinbieber #icp #insaneclownposse #juggalo #biebs #belieber

A freelance art director by trade, Breck’s project materialized about a year ago. And it was almost by accident. “I really just wanted to see how realistic I could create Juggalo makeup in photoshop,” he said. Breck quickly learned he had an uncanny knack for it.

Since then, he has turned dozens of celebrities, and even nine of the Republican candidates running for president, into ICP’s face-painted, Faygo-swilling adherents. Jay-Z. James Franco. Katy Perry. Even Paula Deen.

The #juggalette that started it all. Paula Deen #juggalo #icp #chicken #me #insaneclownposse #selfie

“I’m almost certain she is a Juggalo matriarch,” said Breck.

The artist ultimately hopes that his stunning, Instagram makeovers will offer his subjects—and their fans—an unfiltered glimpse into their truest selves. And Breck promises more to come. “In time, I’m sure we will have more prominent, influential Juggalos come out of the woodwork and knock down the walls of ignorance,” he said. “These things take time, ya know.”

In the meantime, enjoy these luminaries in all of their fleeting, face-painted glory.

Thanks for sharing @seinfeld2000