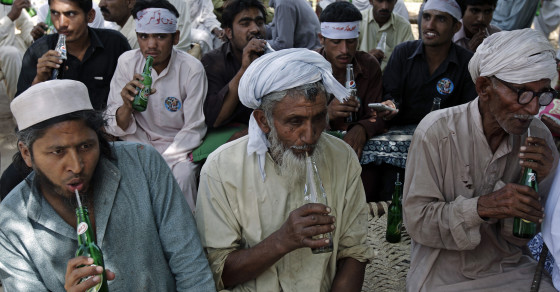 Here’s What People Around The World Are Drinking
By Joshua A. Krisch

Here’s What People Around The World Are Drinking

Ever wonder what they drink in China? Or what’s sipped in South America? You’d be less likely to find sugar-sweetened beverages in the former than the latter, according to a new study published in the journal PLoS.

The study, which include a global survey of beverages in 187 countries, reveal that poorer nations favor sugary drinks, while fruit juices and milk remain beverages of the rich and powerful. Except the United States, which, despite its wealth, ranks in the top 30 for sugary drinks and fruit juice consumption  and somewhere near the middle when it comes to milk.

The Caribbean had the highest rates of sugary drink consumption (more than three servings per day, on average), New Zealand contained the most juice drinkers and Iceland can now officially declare itself the milk-drinking capital of the world.

Here’s a breakdown of the data on global beverage consumption: