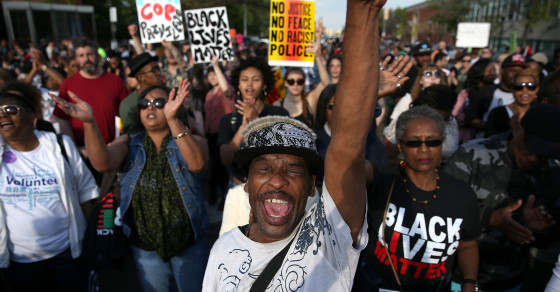 One Year After Michael Brown: How A Hashtag Changed Social Protest
By Jennings Brown

One Year After Michael Brown: How A Hashtag Changed Social Protest

The slogan Black Lives Matter became the rallying cry for protestors across the country in a year marked by police brutality and a new national conversation about it. The three simple words empowered activists who used it at protests and on social media. But one year after Michael Brown’s death catalyzed the movement, much confusion remains about it.

Search queries from Google Trends data provide a telltale sign of the things some Americans are still working to understand about the grassroots movement. Vocativ talked to one of the founders of Black Lives Matter and unearthed the answers to some of the most pressing questions about the hashtag that galvanized a country into action.

Alicia Garza was at a bar in Oakland, California, the night of July 13, 2013, when news broke that George Zimmerman had been acquitted of the second-degree murder of Trayvon Martin.

“After the verdict came out we were silent,” Garza said. “We had nothing to say to each other, so most of us turned to social media for an understanding of what other people were saying to help us form our thoughts and make sense of the emotions that we were feeling that moment. I went on to my Facebook and I saw a whole number of things on my timeline that were related to this verdict, and I saw a whole lot of things that disturbed me.”

Garza noticed two threads of conversation. The first thread she refers to as social justice cynicism: the notion that Zimmerman’s acquittal shouldn’t come as a surprise in a system that fails to protect black families, but rewards a vigilante who took the life of a black child. The second is often called “respectability politics”: the idea that black people could heal from this tragedy by pulling up their pants, taking off their hoodies, voting, getting a better eduction and better jobs.

“I was really tired of this narrative that blames black people for conditions that we didn’t create,” Garza said. “It felt like a dismissal of the real tragedy: that black life doesn’t matter in this country.”

And so as millions of Americans took to social media to express anger and confusion, Alicia Garza wrote a love letter:

Garza’s friend Patrisse Cullors saw the post and turned it into a hashtag.

It was not the first time the hashtag was used on Facebook, but it was the most significant. Garza, Cullors and their friend Opal Tometi, who had the tech expertise to build the necessary platforms, decided to use the slogan to create a movement. And that’s how it started. 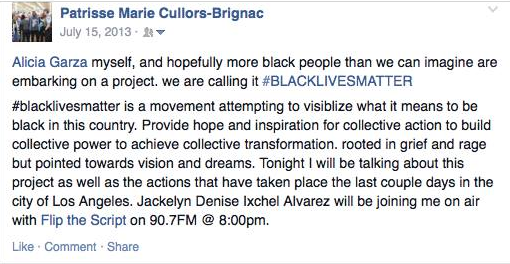 #BlackLivesMatter was the first time a hashtag and a movement were born simultaneously. There are a few earlier forms of “hashtivism” (#Kony2012), there are earlier activism movements that relied heavily on social media (#Occupy), but #BlackLivesMatter is a radically new form of social protest that has had an impact unlike any movement before it.

While it was envisioned as a movement, it has also become an amalgamation of all those things, whether the founders wanted it to or not. A Google Trends timeline of Black Lives Matter search interest shows how the phrase exploded after the death of Michael Brown on August 9, 2014.

Modern technology has allowed the movement to burn brighter as each new tragedy is immediately documented and shared with millions. “The prevalence of smart phone cameras and social media has hugely important for making this point, and for the movement itself. The capture of the reality of racial inequality on instant video has been essential to the movement,” said Elijah Anderson, professor of sociology and urban ethnography at Yale. “Social media has given this movement profound energy and staying power, with not just the ability to call attention to blatant injustice, but to change the general perception of the racial challenges black people face in America, possibly for the better.”

Though the movement was born on social media, many Americans were first introduced to #BlackLivesMatter through television, where breaking news banners below images of looting and fires in Ferguson made the hashtag appear as though it was a call for violence.

Garza acknowledges that there are problems with such a popular, far-reaching movement. “One challenge is that when something becomes trendy, people link on to it and may not actually share your agenda,” Garza said. “Unfortunately, when something becomes a signifier for a movement, it can also become a brand and that gets commercialized and has its content stripped from it. So while we know what people are talking about, others who are still learning about the Black Lives Matter movement might not understand what’s problematic about it.”

Losing control of the message is just one problem of building a movement through social media. While having a slogan that doubles as a metadata tag makes it easy to connect everyone associated with the movement, it also provides a easy way to attack those involved, and the Department of Homeland Security has used social media to monitor protestors since the first activity in Ferguson.

The medium can also prevent the leaders and organizers from leading and organizing.

“Social media definitely makes it relatively easy to generate activity in the absence of an organized structure, and even to coordinate to a certain degree—for example, agreeing on specific dates for simultaneous actions in far-flung places,” said Todd Gitlin, a Columbia professor who was a prominent social activist in the 1960s. “But what makes it relatively easy to call a demonstration probably inhibits the organization’s ability to develop an enduring structure… It would seem that in the short run, virtually anyone can promote a hashtag, and make certain actions happen, but in the longer run, the very availability of social media can stand in the way of strategic planning. We’re still early in the history of social media, though, so how this process will play out is anybody’s guess.”

The closest comparison to the movement is Occupy Wall Street, which relied heavily on social media but ultimately lacked the leadership or structure to make a lasting impact. “I don’t want this to go the same way as Occupy,” said Eric McDaniel, a professor who teaches Black politics and organizational behavior at University of Texas. “It was a lot of upset people but no real plan of action. I think the Black Lives Matter movement needs a very clear plan of action—what you want from federal, state and local government.”

Comment from discussion ELI5: Why is it so controversial when someone says "All Lives Matter" instead of "Black Lives Matter"?.

“This problem addressed by Black Lives Matter is truly specific to this group. Blacks are getting the blunt of police brutality and by saying ‘All Lives Matter’ you’re alienating a group,” said McDaniel. “There’s a lot of evidence to indicate that black lives don’t matter to some people. It’s not just police brutality. Many major newspapers obituaries didn’t report black deaths until 30 years ago. Health issues affecting African Americans the most are being treated less.”

While there are no comprehensive national statistics about deaths at the hands of police, black people are more likely than any other race to experience police brutality, according to a report by the Department of Justice, and 60 percent of incarcerated Americans are black. Black Lives Matter brings attention to the issues of systemic racism, particularly discrimination in the law enforcement and justice system.

And it’s working. “Already, there are reports that greater numbers of whites and others are not able to empathizes with black people, to gain a sense of what they go through in everyday life,” said Anderson. “This changing consciousness has been made possible through the compelling videos that are commonly made available through social media.”