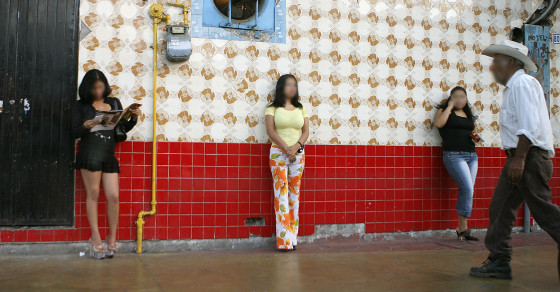 One quarter of female sex workers based in Mexico’s border cities of Tijuana and Ciudad Juarez enter the industry as minors, and are more likely to experience higher rates of sexual violence and HIV exposure when compared to their adult peers, according to a new study published today in The Journal of the American Medical Association.

Getting into the sex trade at an earlier age increased the likelihood that participants were violently coerced into commercial sex, had higher client loads, and less condom use within the first 30 days of work—leading to an increased risk of HIV transmission, the researchers found.

“Minors are more vulnerable because they are easier to control, often they’re running away from abusive situations and have no social support or connection, and are more valuable to people who profit from the sex industry, in that they can be sold as ‘pure’ or ‘virgins’ over and over again and many men will, disturbingly, pay a premium for sex with a young girl,” said Jay Silverman, study author and Director of Research for the Center on Gender Equity and Health at the University of California, San Diego.

Silverman told Vocativ that men were willing to pay more for sex without a condom, especially if it’s with a younger sex worker who is thought to be free of sexually transmitted diseases.

UCSD researchers spoke with 1,041 women aged 18 and over who engage in street and/or indoor prostitution. They narrowed the group down to 603 participants, with an average age of 34, and found that over 25 percent of the women reported that they entered the industry before they were 18, and 11.8 percent said they began sex work before they were 16.

Over 35 percent of those who started under 16 reported not using a condom in the first 30 days, as opposed to 12.2 percent of 16 or 17 year olds, and eight percent of adults. This might account for the disparate rates of HIV infection—5.9 percent for those beginning before 18 and 1.6 percent for those starting after.