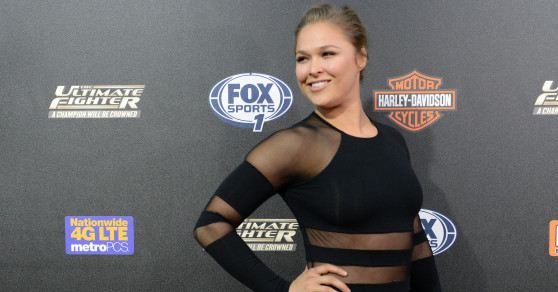 Rousey, perhaps the most dominant UFC fighter in the world these days—of any gender—gets a third what the men get

Ronda Rousey is the definition of a breakout star: After lighting a spark of body image positivity by telling off anyone who thinks her body is too “masculine,” she won her 12th fight in 34 seconds, maintaining her undefeated record. She also happened to write a New York Times bestselling autobiography, which Paramount Pictures secured the rights to Monday, with Rousey playing herself.

So why is she making less than a third of what her male counterparts make per fight?

That means Rousey made less than one-third of what Weidman made for a fight, not factoring in endorsements or other bonuses.

While Weidman is getting $50,000 raises, Rousey has seen her pay go up in $10,000 increments after each successful title defense.

The question remains: Why is Ronda Rousey, clearly the most dominant woman in her sport, being paid significantly less than the top male fighters? With well over half-a-million people shelling out $60 for pay-per-view to see Rousey’s latest knockout, it may be time she starts getting a larger cut of the pie.