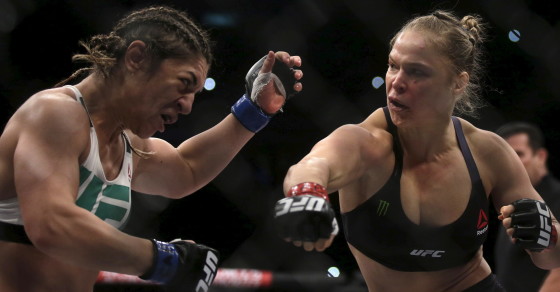 After fiery statements and a robust win, UFC fighter Ronda Rousey is having a moment on social media

UFC fighter Ronda Rousey is having a moment on social media. Her statement in a UFC YouTube video last week for everyone who has said her body is too “masculine” catapulted her on Twitter, with the hashtag #RondaRousey being shared 68,000 times in the 48 hours after her statement was released, according to Topsy.

As if that weren’t enough to get the media going, Rousey screamed at her opponent, Bethe Correia, “Don’t cry!” after she defeated Correia in 34 seconds on air Saturday night. The win at the UFC 190 event in Rio de Janeiro gave her overall UFC record a boost to 12-0.

But even before Rousey’s powerful win and filmed message, her pride for her athletic body was being celebrated. Thousands of memes have been shared online, most of them inspiring young women to be empowered by strong bodies. “I have this one term for the kind of woman my mother raised me to not be, and I call it a do-nothing bitch,” Rousey said in her YouTube video last week.

That awkward moment when an entire fight can fit in a tweet, lol. @RondaRousey #UFC190 #LastNight pic.twitter.com/JWpkghRltV

Rhonda rousey is a beast Daaaaaaaaaam