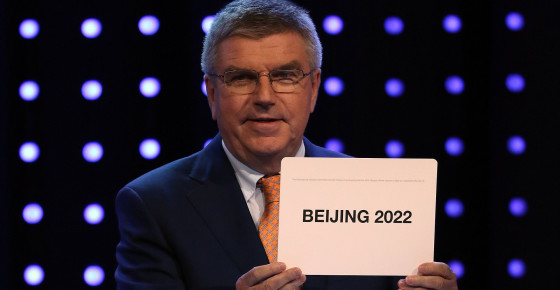 Beijing Gets Less Snow Than Any Other Winter Olympic City

Phoenix gets more precipitation than Beijing, and it's in the middle of the desert. So why did it get picked to host the 2022 Winter Games?

Skiing, in its various forms, is a major draw at the Winter Olympics, but it requires one thing: Snow. Given that, people are scratching their heads at the announcement that Beijing has been picked to host the 2022 Winter Games. Beijing gets less snow than any other previous Winter Olympic city. In fact, it gets less precipitation in February than Phoenix, which is in the desert.

Based on our analysis of every city that has hosted the Winter Games since alpine skiing was included, Beijing is among the warmest: Its average high during February is 41 degrees, while the average low is 21 degrees. With an average snowfall of .1 inches for that month, Beijing will rely almost entirely on an extensive snowmaking operation. That has skiers concerned about the quality of the snow and how it will affect the competition. (Manmade snow is generally wetter and often icier than natural snow.)

Some observers are skeptical of the International Olympic Committee’s motives behind picking a city in a country better known for its success in the summer Olympics. “They may be thinking about how voting for China could help them down the road, ” David Wallechinsky, president of the International Society of Olympic Historians, told the New York Times. (Wallechinsky did not vote in the city selection.)