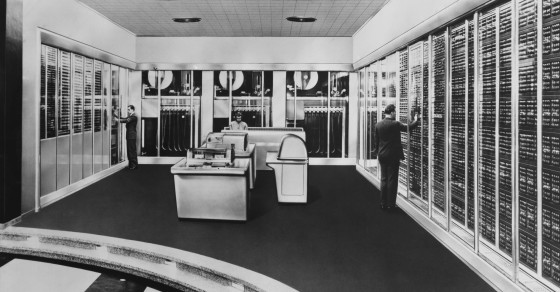 Obama’s Supercomputer Could Power An Apple Watch For Every American

Obama wants to build a one exaflop supercomputer by 2025, but what does that actually mean?

Obama has pressed enter to an executive order for building the world’s fastest supercomputer. At a billion billion calculations per second, you’d need a supercomputer of your own to work out exactly what that means in non-MIT mathematician terms. That’s where Vocativ comes in: We worked out exactly how many iPhones, Apple Watches and Xbox Ones the one exaflop machine could power if it were released today. And we never went to MIT.

The president’s executive order, which he signed on Wednesday, specifically requests a machine that is 30-times faster than the world’s current fastest supercomputer, China’s Tianhe-2. According to calculations by Vocativ, Obama’s supercomputer would amount to the same power as 5,797,101 iPhone 6s, 763,359 Xbox Ones or 333,333,333 first generation Apple Watches—that’s enough power to operate an Apple Watch for all 321 million American citizens, and then some.

But the supercomputer won’t be used to allow a lot of people check their Facebook news feeds or play Angry Birds 2. Obama’s order established the National Strategic Computing Initiative, which will facilitate efforts across several federal agencies including NASA, the FBI, the National Oceanic and Atmospheric Administration, National Institutes of Health and the Department of Homeland Security, who will all help design the machine and test it to suit their own needs. What exactly are those needs? The executive order states that previously, such supercomputers have been used to “simulate galaxies, weather and climate, molecular interactions, electric power grids, and aircraft in flight.”

To arrive at our calculations, Vocativ gathered the estimated power of a range of devices in flops, which is a unit of power for supercomputers, and compared these with the expected power of Obama’s new supercomputer.