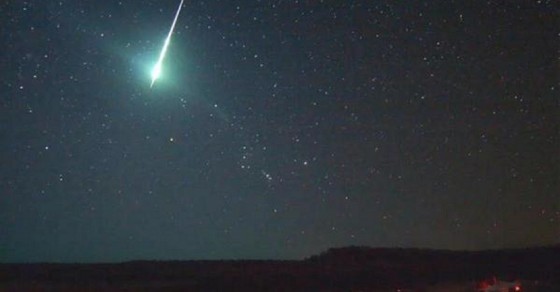 The dazzling meteorite led to some amazing videos and hiliarious memes

A mysterious green fireball flew over the skies of South America, triggering a wave of videos, pictures and memes on social media. The fireball, whose flight lasted only a few seconds Thursday night, was seen most clearly in Buenos Aires, but was also spotted in parts of Brazil and Uruguay. The resulting hashtag, #CieloVerde, which translates to green sky, was shared over 55 thousand times on Twitter since.

Internet users in Argentina, Brazil and Uruguay were quick to share jokes on the nature of the mysterious flying object, with the most popular meme suggesting that it was in fact Argentinian soccer star Gonzalo Higuaín’s high penalty kick from the 2015 Copa America championship game. Others ventured that the shining object may have been a radioactive Mr. Burns, the Green Lantern, or Stitch, from Disney’s Lilo & Stitch, among others theories.

Argentinian media quoted a meteorologist, who said that the fireball was, in fact, a meteorite burning up in the atmosphere. While it may not be aliens or the supernatural, the fireball still managed to provide plenty of excitement to amazed onlookers.

"In brightest day, in blackest night, No evil shall escape my sight…" #CieloVerde pic.twitter.com/ySP1KrVM0w