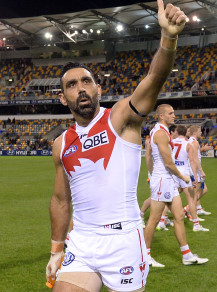 The future of Australian sporting legend Adam Goodes is up in the air this week, following a string of incidences that has brought attention to the role of racism in one of the country’s most popular spectator sports.

Goodes, 35, has played for Australian Football League (AFL) team the Sydney Swans since 1999. Throughout this time he has risen through the ranks to become one of the AFL’s most celebrated players, twice winning the prestigious Brownlow Medal, and voted Australian of the Year in 2014.

His stature, however, hasn’t shielded him from the country’s endemic racism. The issue was first brought to public attention in 2013 when Goodes, an Indigenous Australian of Adnyamathanha and Narungga descent, asked officials to remove a 13-year-old for calling him an “ape” during a match. Speaking to reporters, he said that while he didn’t blame the teen, her actions were indicative of the nation’s attitude toward the indigenous population.

“It’s not the first time on the footy field I’ve been referred to as a monkey or an ape. It was shattering,” he said. “Racism has a face… it was a 13-year-old girl.”

The incident kicked off a wave of debate on whether Goodes made the right call, the pervasive nature of racism in Australian sports, and the treatment of players on the field, including the 71 Indigenous players currently in the AFL. Though it eventually died down, tensions flared again in May when Goodes was repeatedly booed when playing on Melbourne turf, a scene that has continued to play out when he is on the field. Just days after the Melbourne incident there was more of the same treatment at a game between the Sydney Swans and Melbourne’s Carlton team, and Goodes, after scoring a goal, performed “a little bit of a war cry.” Some commentators labeled the move “aggressive” and Goodes found himself once again having to defend his Indigenous culture.

Yet, the booing continued. Last weekend, at a game in Western Australia Goodes was once again subjected to what has been described as “relentless” heckling. Fed up, Indigenous teammate Lewis Jetta performed his own war cry dance, angering some sections of the crowd. Ever since, talk of the public’s behavior towards Goodes has dominated newspaper headlines across Australia, with some prominent figures weighing in on the controversy.

In many cases, it underscores the need to address the casual and sometimes overt racism directed at Goodes. This was especially evident when former goalkeeper for the Brisbane Roar, Griffin McMaster, tweeted that Goodes was “un-Australian” and should be deported.

Though McMaster was suspended from a match as punishment, other sporting icons have weighed in, including cricketer Shane Warne who suggested that the crowd should be allowed to boo whoever they want.

This whole Adam Goodes drama is ridiculous. The public can boo or chant whoever's name they want ! It's nothing to do with being racist....

If the public don't like a sportsman because of the way they play the game, they boo, if they like them they cheer, nothing to do re racism

The ordeal has become too much for Goodes, who decided to pull out of an upcoming game this Saturday out of deference to his teammates. There has been talk that he might not come back to the game and enter into early retirement, but his bosses say he just needs a little time off.

“As a club we are working with Adam and those close to him and supporting him through what is a really difficult time,” said Swans CEO Andrew Ireland. “Adam is sick and tired of this behaviour. It has been happening for too long and it has taken its toll. We will give Adam all the time he needs. We will keep supporting him and he will return to the club whenever he is ready.”

Uploaded By: The Weekly