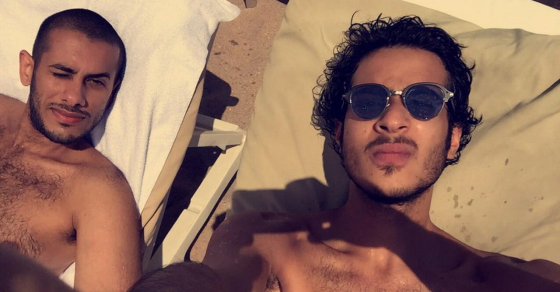 Members of King Salman's 1,000-strong entourage in France are adding a new twist to a time-honored tradition among Saudi elites

Swanky villas, fleets of gleaming new Mercedes and an entire beach annexed from the public are apparently not enough for some among of the 1,000-strong entourage accompanying Saudi King Salman during his three-week sojourn at the French Riviera. They’ve turned to Instagram to flaunt their wealth and privilege, too.

Images uploaded to the social media site capture Saudi Arabia’s elites basking in excessive splendor. Some have taken sunbathing selfies on the beach. Others have snapped still life photos of their fruit drinks aboard yachts on the Mediterranean. One member of the royal entourage posted a picture of the tony InterContinental Carlton Hotel in Cannes—from the inside of his Ferrari.

These virtual postcards offer a rare and new glimpse into a time-honored tradition among Saudi royalty. For decades, the kingdom’s elite have made vacationing during the European summer an extravagant enterprise. King Fahd, who ruled from 1982 to 2005, epitomized the art of the riotous Saudi holiday, constructing a mosque, sports center and marble and gold replica of the White House in Marbella, Spain. Up to 3,000 people traveled with him on visits to the 200-acre spread. During one seven week vacation before he died, Fahd and company reportedly blew through more than $100 million. The Saudi royal family also owns a sprawling palace in Switzerland.

General view of Saudi King Fahd's mansion in the wealthy resort of Marbella, one of Spain's most exclusive coastal resorts.

Before ascending the throne in January, Salman indulged in similar taste for high-end luxury. As crown prince, he spent more than $30 million to book three islands in the Maldives last year, forcing several resorts to cancel the reservations held by guests. To complete the month-long trip, Salman, who was 78 at the time, reportedly brought along a luxury yacht, 100 bodyguards and a floating hospital.

Like his trip to the Maldives, Salman’s excursion to the French Riviera this month has drawn a outrage and ridicule. More than 100,000 French citizens have petitioned against the closing of the public beach. The Saudi king has also been harshly criticized for going on vacation while his country continues to lead a war against Houthi rebels in Yemen.

Translation: The holy traitor Salman, after killing children in Yemen goes to swim in the nudist beaches in France.

The behavior exhibited by Saudi royalty abroad could also be seen as a direct contradiction of the country’s practice of Wahhabism, an ultra-conservative strain of Islam. “It’s particularly outrageous for some Saudis to see their king partying in the supposedly hedonistic west,” said David Weinberg, a scholar with the Foundation For Defense of Democracies, a right-of-center think tank in Washington DC.

Wahhabists practice an austere form of Islam, that rejects embellishments of any kind. Alcohol, immodest dress and punctual prayer are mandatory. It also discourages mixing with non-Muslims and bans smoking and listening to music.

King Salman has demanded French authorities not post female officers on the public beach that his entourage has taken over—or anywhere else within his view during his three-week trip to the French Riviera. He has also had a personal elevator constructed from his villa to the beach for increased privacy, according to reports.

Younger members of the royal entourage, meanwhile, continue to be a bit more conspicuous.