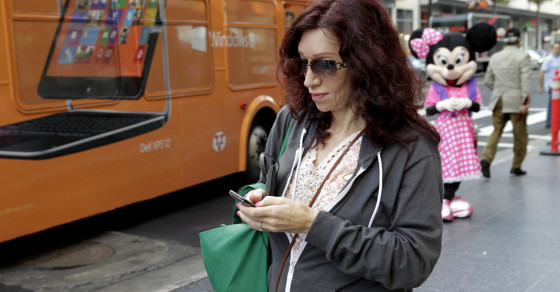 Texting And Walking May Actually Make You A Better Walker

It's rude, sure, but is it dangerous? Not necessarily, a new study says

Go ahead, text while you’re walking down the street–everyone else does. And don’t listen to those people who tell you you’re likely to crash into things–in fact, the multitasking may actually make you walk more cautiously.

Scientists took 30 people through an obstacle course they built to mirror the outside world and recorded patterns in the people’s movements while they were both texting and completing a math test on their cell phones. When people text and walk, they adopt a “protective” gait, the scientists concluded in a study published Wednesday by the medical journal PLOS One.

In other words, people step more slowly, lift their feet higher off the ground and shorten their step length when they’re deep into their smartphones. So it takes them longer to get to their destination, but they aren’t necessarily putting themselves in greater danger.

Not every scientist is on board with the idea of texting and walking. Another study published by PLOS One in 2014 found that it can cause “falls, trips and collisions with obstacles or other individuals.” Jack Nasar, an Ohio State University professor, found the number of people who ended up in the emergency room every year due to incidents involving a cell phone more than doubled from 2005 to 2010. Accidents involving unaware pedestrians getting hit by cars are rampant.

Also, there’s also the rude factor. Prioritizing a text over moving out of the way of someone crossing your path on a busy street is not exactly considered great manners.

Americans spend an average of 151 minutes per day looking at their smartphone screens anyway. Maybe we should give ourselves a time out, regardless of whether scientists say we will trip over ourselves or not.