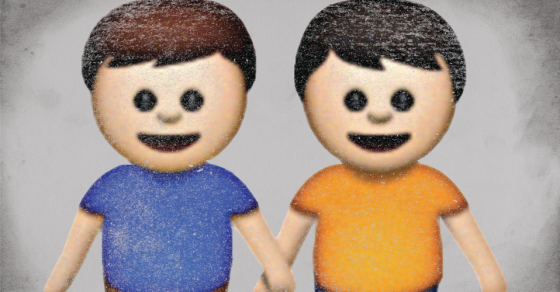 Gay-friendly emojis may be the latest casualty of the "gay propaganda" ban in Russia. No word on whether the eggplant will be affected

Gay-friendly emojis may be the latest casualty of Russian President Vladamir Putin’s crackdown on “gay propaganda.”

Russian media watchdog Roskomnadzor requested that a pro-Kremlin group investigate the proliferation of gay emojis, according to a local report in Izvestia.

The federal group responsible for patrolling Russian media wrote a letter to “Young Guard of United Russia,” the youth wing of the “United Russia” political party, requesting the group’s members investigate emojis posted to social media platforms. Gay emojis might violate the countrywide ban on “gay propaganda,” according to Roskomnadzor.

Roskomnadzor took issue with the gay emojis in particular, like the gay and lesbian same-sex couples and same-sex couples kissing, that Apple unveiled in April. (It’s not clear whether the eggplant emoji fits under the category of problem emoji for Russian officials touting “family values.”)

Gay emojis are part of “the spread on social media of untraditional sexual relations among minors” that “denies family values” and “forms disrespect for parents and other family members,” the statement from Deputy Head of Roskomnadzor, Maxim Ksenzov Mikhael Marchenko, said. This all falls under Russia’s federal legislation “on the protection of children from information that’s harmful to their health and development,” which Putin signed into law in 2013.

This is part of a larger trend of Russian authorities cracking down on what they see as “gay propaganda” online. Roskomnadzor enforces the idea that homosexuality online will impact the mental health of innocent children who scour social media.

A representative of “Young Guard” said the group hadn’t yet officially received the request from Roskomnadzor but would look into it.