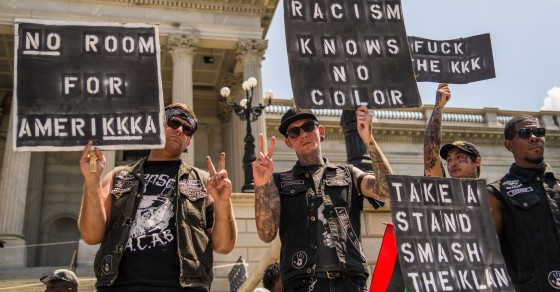 They showed up wearing all black, covered in tattoos and making more noise than any of the white supremacist groups at the Ku Klux Klan rally earlier this month at the South Carolina statehouse in Columbia. The patches on their vests read “Bastards,” a title members of this motorcycle club embrace. The signs they carried through a crowd of more than 2,000 neo-Nazis, New Black Panthers and Klansmen protestors included language that was even more crass.

“Most of the crowd thought we were white supremacists,” the club’s president, Steven “Chavez” Parker told Vocativ—and he was right. Initially, protestors and white supremacists alike didn’t know what to make of Parker and his motley crew of misfit bikers. When they raised the signs they’d spent hours painting the day before the July 18 rally—”FUCK THE KKK,” read one sign and “MY BABY MAMA IS BLACK,” read another—it was clear whose side the Bastards MC was on.

“I was yelling at the ‘Grand Wizard’ or the ‘Grand Dragon,’ whatever he is,” Parker said of a confrontation he had with a North Carolina-based Klan leader, who often give themselves grandiose titles like “Imperial Wizard,” or “Grand Dragon.” “He was very proud of himself…I mean, all this posturing, all this peacocking…for what? What did they accomplish? Now they gotta ride all the way back to their little state.”

This is not your typical motorcycle club.

Biker gangs—or biker “clubs,” as they prefer to be called—have a long history of hate-filled racial allegiances. The symbols on their clothing, oftentimes swastikas or other Nazi-esque imagery, often mirrors that of white supremacist organizations. A 2011 report from the Anti-Defamation League, titled “Bigots on Bikes,” describes the growing link between white supremacist groups and Outlaw Motorcycle Gangs (OMGs).

“Overlaps between the outlaw biker subculture and the white supremacist subculture make it easier for members of both movements to interact with each other and facilitate the forming of connections between them,” the report found. “These overlaps include similar symbols and language, as well as shared practices.”

More How The KKK Botched Its Big Chance For A Comeback

Not only do Parker and the Bastards fail to fit that mold, but they want to break it.

“We don’t tolerate racism, sexism, classism, homophobia, [the] police state…the prison industrial complex—we don’t tolerate hate,” Parker said in an interview at a coffee shop just two blocks from the Klan rally, after he and the Bastards screamed at Klan members and Nazis while police did their best to keep the groups separated. “We would like to see change, not necessarily through violence, but through direct action.”

Parker has been involved in motorcycle clubs for more than a decade. At 29, he’s already been a patch-wearing member of a “One-Percenter” club and other biker crews. The term “one-percenter” dates back to the 1940s, when—as the story goes—the American Motorcyclist Association tried to distance itself from outlaw clubs by claiming 99 percent of the country’s bikers are not “outlaws.” Parker said he “retired” from the club in 2014 and later founded the Bastards MC. Parker asked Vocativ to not identify his former club by name, but our research confirms that it is a support club for one of the most notorious MCs in the U.S.

“It was a very great time in my life, it was a great experience. I got to meet a lot of really great brothers,” he said of his time as a One-Percenter. “One thing I missed was that all the guys in my club were all like me, they were all just white. It wasn’t a bad thing, it’s not bad to be white, it’s not bad to be any color. White, black, Asian, it’s all the same—we’re all human beings…[but] we didn’t really have a lot to bridge out and learn about.”

A lot of MCs are exclusive to one race, be it black, white or Latino, they rarely—if ever—cross racial lines.

About six months ago, after Parker had left his previous MC, he was stopped on his bike at a traffic light in Columbia when another biker pulled alongside him.

“I sort of went through this weird time in my life and me and this man met at a red light,” Parker said, gesturing to the biker sitting next to him wearing the “Vice President” patch over his right breast. “We didn’t know each other. He was sitting next to me on his bike and I was sitting next to him. We struck up a conversation, I asked him to follow me to a gas station, and he did…and we ended up talking in the parking lot for three hours and he became my best friend.”

Parker (left) and Guinn (center) formed the Bastards after meeting at an intersection in Columbia about six months ago.

The other biker was Joseph Guinn, who teamed up with Parker to form the Bastards—an ode to the Nazi hunters featured in Quentin Tarantino’s 2009 film Inglorious Basterds. “Nobody came into this saying this is what the Bastards are going to be,” Parker said. “We are completely a mess. But it works because it’s our mess.”

Since their fortuitous meeting at an intersection in Columbia, the Bastards MC has grown to more than a dozen members, including an African American, an Asian and a Native American, with dozens of others asking via-social media how they can join. Their “mess” has evolved into an organized effort to confront hate groups who try and invade their city, which has become a hotbed of racial tensions after the South Carolina legislature voted to remove the Confederate battle flag from the statehouse after the June 17 murder of nine black people allegedly by white supremacist Dylann Roof at a predominantly African-American church in Charleston.

“South Carolina’s been turned into a battle zone,” Parker said.

The club is non-violent, according to Parker, but that doesn’t mean they won’t defend themselves if provoked.  When we met Parker he was recovering from a busted nose he got during a scuffle a few weeks earlier. Members of the club keep their own makeshift weapons like a padlock at the end of a bandana handy in case trouble finds them, which it has.

Since the July 18 rally, the Bastards have been getting accolades online and from fellow South Carolinians. Their Facebook page—one of the avenues the MC uses to coordinate events like the July 18 counter-demonstration—has more than 3,000 “likes,” with citizens of Columbia and elsewhere leaving comments like, “Love the movement! If only there was more people like you guys to stand up against these racist fear mongers,” and “great work what you guys are doing in the community!”

Not everyone is gushing over the Bastards, though. Parker says the KKK has used their own intelligence gathering operation, the “Klan Bureau of Investigations,” to identify the Bastards after they confronted them at the statehouse. The club has also faced harassment by people who recognize them from the rally’s media coverage. “Last week five dudes rolled up to us at the Waffle House and called Kyle a nigger and then drove away,” said Parker, who added that he is not the least bit daunted by the Klans’ tactics.

“I’ll tell you this right now, if the Klan comes looking for us, [they’re] gonna need those bedsheets,” he said. “That’ll come in real handy to cover up the bruises and clean the blood off their fucking faces.”