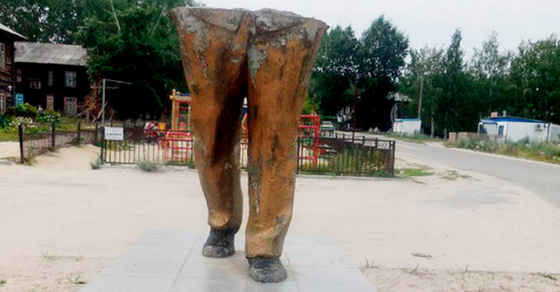 It's a "selfie revolution," so to speak

A drunk man toppled an already headless Vladimir Lenin monument in Siberia Tuesday when he tried to take a selfie with it, making this the second Lenin statue in Russia to be toppled by a selfie taker in the past two months.

The drunk man climbed on to the communist hero’s pedestal in the Moryakovsky village in Siberia to take a selfie with it and lost his balance, according to a local official. He hung on by grabbing Lenin’s torso, and both he and the torso tumbled to the ground. The man fractured a leg and wrist. “We don’t find this funny,” the local official said, AFP reported.

The unlucky bronze Lenin statue lost its head in June to another drunk man who attacked it with a hammer, and was later arrested.

Another Lenin statue in the city of Kemerovo, Russia, about three hours southeast of Moryakovsky, also fell over in June when a drunk man reportedly jumped and tried to grab its hand to take a selfie. It smashed into several pieces. Bystanders watched as he tried to reassemble the statue, but failed. He escaped when the witnesses approached, but cops later detained him.

The Siberian Times jokingly dubbed the spate of toppling statues a “selfie revolution.”

More Russia Wants You To Stop Taking These Types Of Selfies
​

Debasing historic leaders is another addition to the Russian authorities’ list of reasons why they are cracking down on selfies. The government began a countrywide campaign this month to raise awareness for deaths that occur while taking selfies. They say dozens of Russians have died this year in uncompromising selfie positions.

Lenin statue: before the second toppling.

Lenin statue: After the second toppling.