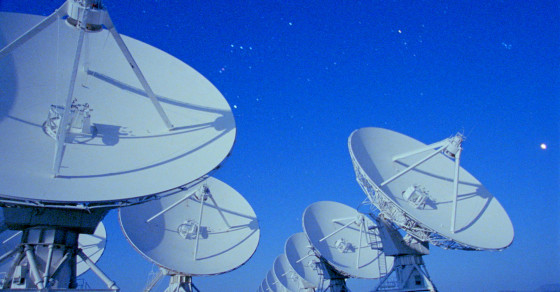 Silicon Valley Invests Millions In The Search For Extraterrestrials
By Joshua A. Krisch

Silicon Valley Invests Millions In The Search For Extraterrestrials

Stephen Hawking, a Russian billionaire and E.T. walk into a bar. The result? A big data, big-bucks approach to alien hunting

Ten years and $100 million. That’s what it’ll take to find out whether we’re alone in the cosmos, according to an ambitious new venture backed by the likes of Astronomer Royal Martin Reese and famed professor Stephen Hawking. “It’s time to commit to finding the answer—to search for life beyond Earth,” Hawking announced at the launch of Breakthrough Listen, a program that will listen for broadcast signals from the stars neighboring our little blue planet.

“We are alive. We are intelligent. We must know.”

Russian tech tycoon Yuri Milner boasts that Breakthrough Listen will be able to collect more data in one day than previous searches for extraterrestrial life were capable of collecting in an entire year. To pull it off, Milner intends to use two of the world’s largest telescopes—the Green Bank Telescope in West Virginia and the Parkes Telescope in Australia.

As Breakthrough Listen collects these massive datasets, Milner says the company will turn it loose. They plan to make all of the information publicly available, for SETI diehards and other citizen scientists to pore over at their leisure. “With Breakthrough Listen, we’re committed to bringing the Silicon Valley approach to the search for intelligent life in the Universe,” Milner says.

Good luck, E.T.—Earth is about to bring Silicon Valley to you.