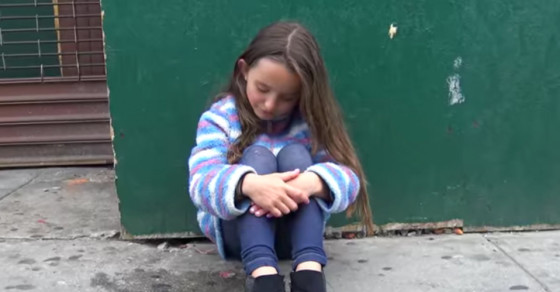 A viral video which showed a man attempting to abduct a young girl in New York City might have been staged.

An investigation by Vocativ into the viral video “Would You Help A Lost Child?” reveals police do not have any record of a phone call from the video’s director alleging a man had attempted to abduct a nine-year-old girl in Brooklyn.

The video is the latest in a long line of “social experiments” posted by YouTube user DennisCeeTv, and shows a young girl, played by an actress named only by her first name Talie, walking along the pier at Sheepshead Bay in Brooklyn and telling strangers: “I lost my mom.”

Later, the actress is filmed sitting alone on a sidewalk. As she is being helped by one man, a second man, whose face is blurred in the video, approaches her and claims: “You’re looking for your mom? I just saw her yelling for you. She’s right there.” He then attempts to drag her away, claiming the girl lives in his building, until Cee, whose real name is Dennis Chuyeshkov, appears on film and claims he is calling the police. But the video cuts to black before the police arrive.

Dennis Chuyeshkov or "Dennis Cee" with nine-year-old actress Talie in the viral video: "Would You Help A Lost Child?"

Vocativ contacted Chuyeshkov, who told us the latter scene was filmed at 15th street and Brighton Beach Avenue in Brooklyn on June 7—but the New York Police Department told us they had no record of the incident. “(There is) no report on file for this specific date,” an NYPD spokesperson said.

The 20-year-old denied that the video, which as of Friday has reached almost 10 million views since it was posted on June 11, was staged, but refused to provide proof of its authenticity. “I have the footage personally. I can’t disclose that information,” he said. “You’re entitled to think whatever you want. I don’t share my business information.”

After the video cuts to black, text reads: “In order to keep the suspect’s identity confidential, I couldn’t upload the video for police purposes. There is no exercise better for the heart than doing right and helping people.” Chuyeshkov then reappears on camera and announces that he is selling t-shirts and asks viewers to follow him on social media.

In Chuyeshkov’s previous videos, he has been assaulted for pretending to take photos of black people, and asking others if they would like to buy a gun, only to produce a water gun.

This isn’t the first time viewers appear to have fallen for a staged video: In December, an eyewitness told Vocativ another YouTube user’s video, “How Does A Homeless Man Spend $100?”, which has received over 39 million views, was staged.