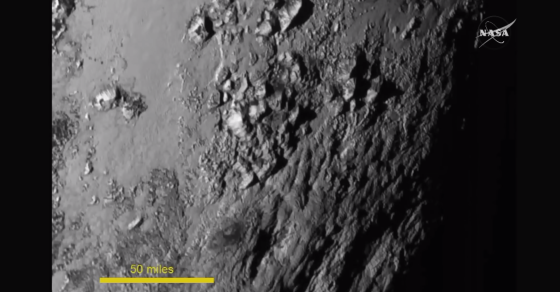 New Horizons has given us Earth dwellers our best ever look at Pluto—and surprise, surprise, it’s spectacular.

NASA has released the first images the spacecraft taken during this week’s historic flyby, where it passed within 7,750 miles of the dwarf planet, travelling at 30,800 miles per hour. To give that perspective, Tuesday’s photo which appeared to depict the outline of a heart on Pluto’s surface—now called Tombaugh Regio—was taken at a distance of 476,000 miles, around 16 hours before New Horizons’ closest approach.

The photographs of Pluto are the best we’ll get for the foreseeable future, as New Horizons has completed its main duty and is already on its way towards deep space. Wednesday’s images are just the first segment of a trove of data aboard New Horizons that will take around 16 months to fully download as it is transmitted across 3.6 billion miles of space between Pluto and Earth.

Wednesday's photograph is a closer look at one rectangular section of Pluto.

One of the closest-ever images of Pluto's surface.

The best-ever image of Charon, the largest of the five known moons of the dwarf planet Pluto.