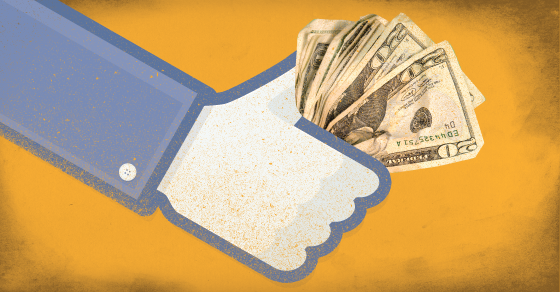 Every Single Second Facebook Earns This Much From Ads

The video ads you see while scrolling through your newsfeed? They're making Facebook really, really rich

Facebook’s market capitalization hit $253 billion—and that’s mostly thanks to the advertisements you see when you scroll through your newsfeed. The website set a speed record on Monday when it reached the quarter-of-a-trillion milestone in a little over three years, the fastest ever for companies trading on Standard & Poor’s 500 stock market index.

Facebook makes over 90 percent of its money from advertisements, which increased 46 percent to $3.32 billion during the first quarter of 2015, largely thanks to the introduction of video advertising last year. At $432 per second, here’s how much money Facebook earns each second you’re on this page:

The website started trading publicly on the stock market in May 2012 at $38 a share, but traded below this Initial Public Offering (IPO) price for more than a year, until rising mobile ad sales helped it recover during the of summer 2013. On Monday, shares were valued at $90.10—87 times the company’s earnings and almost five times that of the average company on the S&P 500 index, according to Bloomberg Business.

Facebook, which made 69 percent of its ad money from mobile in the last quarter of 2014, is now the ninth biggest company on the S&P 500, ahead of Walmart, Procter & Gamble and Google—the last of which took eight years to reach Facebook’s current market capitalization.