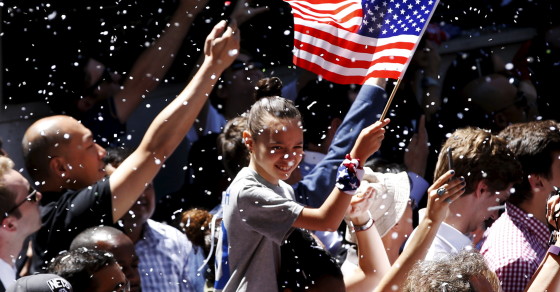 This Is How Ticker Tape Parades Have Changed Over Time

We used to celebrate adventurers, world leaders and the military a lot more often

A visual showing who ticker tape parades have celebrated since the beginning of the 20th century in New York City offers a unique look at the values of our time—and how those values seemed to have changed.

A graph by Noah Veltman shows that each decade had distinct priorities. From the 1910s through the 1960s, confetti-throwing parades often celebrated world leaders, adventurers and the military. Starting in 1970, the number of ticker tape parades in general plunged. Then, from the 1990s through the 2000s, athletes became the center of attention, the graph shows.

The last time women were at the center of a ticker tape parade in New York City was in 1984, when two female gold medalists joined other U.S. medal winners after the Los Angeles Summer Olympics.

An image of the chart showing parades over a decade is below. Here is an interactive version of it.