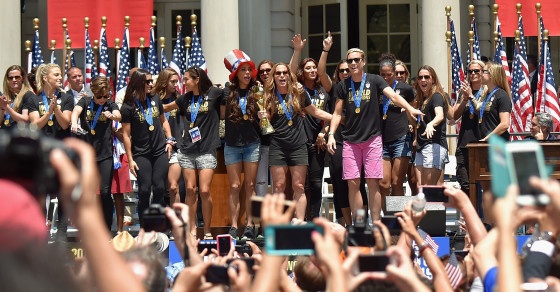 Thousands lined the streets of downtown New York City today in honor of the U.S. women’s soccer team and their World Cup victory. The event was the first-ever ticker-tape parade for a women’s sport; 12 floats carried members of the team, including MVP Carli Lloyd. The celebration continued at City Hall Plaza, where about 3,500 excited fans watched the team receive honors from Mayor Bill de Blasio. Throughout Manhattan and across the country, people extended congratulations and showed their enthusiasm for the inspiring athletes with photos and tributes.

Follow along with this story on our interactive social map.

Nothing like a good ol' fashioned ticker tape parade to celebrate some amazing ladies! #USWNTParade pic.twitter.com/67weqhFAEU