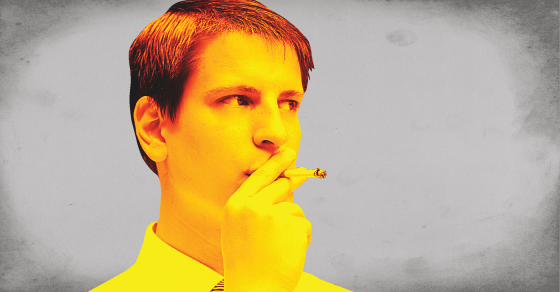 Not Finishing High School Can Be As Dangerous As Smoking
By Joshua A. Krisch

Not Finishing High School Can Be As Dangerous As Smoking

Your high school diploma could add as many years to your life as smoking lops off. A particular study published in PLoS One suggests that lack of education may be killing people at rate comparable to that of smoking cigarettes.

“There’s an increasing amount of evidence suggesting education is causally linked to health,” says Patrick Krueger, a sociologist at the University of Colorado and coauthor on the study. “If indeed it is causal, the magnitude promises to be about as much as cigarette smoking”

They found that a shocking number of deaths every year are attributable to dropping out of high school or failing to finish college. “It’s pretty clear that [finishing high school] is advantageous for survival,” Krueger says. “We estimated that [not finishing high school] could account for about 145,000 lives every year.” The study also found that over 110,000 deaths could have been prevented had adults with some college completed their bachelor’s degree. Smoking, by comparison, claims about 340,000 lives in the United States every year.

For the 10 percent of U.S adults who never obtain a high school degree, lack of education spells a future of low wages, unhealthy behaviors and emotional stress—factors that may contribute to premature death. To better understand the connection between education and mortality, researchers examined data on roughly one million Americans registered in the the Centers for Disease Control and Prevention’s National Health Interview Survey.

The correlation is well established by a large body of research, and this particular study had the advantage of an enormous sample size, but it’s impossible to prove that lack of education causes death, per se. As with any retrospective study of entries in a database, it’s always possible that the connection between education and mortality could be chalked up to chance. Despite that, the authors say it’s persuasive. “It’s an association that seems to persist, no matter how we challenge it with scientific studies,” Krueger says.

Based on the findings, Krueger says that policymakers need to start viewing equal opportunities in education as a public health issue. “A lot of education policy in the United States focuses on jobs and earnings,” he says. “But our research demonstrates real benefits for survival as well.”