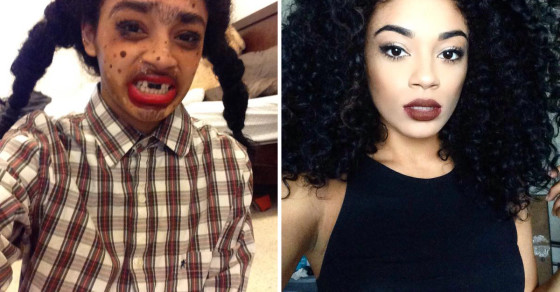 With #DontJudgeChallenge, Teens Take Over Twitter
By Kat Lapelosa

Young Twitter users have made the hashtag trend worldwide, even over major current events

It’s often stated by tech media that Twitter is a dying platform when it comes to teen usage, but a recent video trend has proven that this demographic still views the platform as a relevant form of social media. For more than a week teens have led Twitter trends with the #DontJudgeChallenge, an idea for promoting a culture of non-judgmental attitudes when it comes to outward appearance. Through video, teens are using creative makeup looks to create a “less attractive” version of themselves (unibrows, blacked-out teeth, and dots/pimples the most popular choices) and, with the wave of their hand, suddenly reveal their better-looking, “true” selves.

While #DontJudgeChallenge has been tagged over 154,891 times on Instagram, Twitter was overflowing with overall mentions and video clips. According to Topsy, there are over 1.7 million uses of the hashtag in the last eleven days, with a spike over the July 4th weekend. A Twitter account @DontJudgeChalle was created specifically to aggregate popular posts, netting over 27,000 followers since June 5th.

However, the trend has also received criticism across the web for blatant examples of how standards of beauty are defined and demonized, and counter tags, such as #BeautyInAllChallenge and #ImUglyAndIDontCare, have resulted in over 13,233 mentions since July 5th. Despite the backlash, it hasn’t stopped teens from sharing their “transformations.”

Back then, they didn't want me.. Now I'm hot they all on me… pic.twitter.com/pebx5FXa6j

i've got acne and glasses but this challenge does not offend me #dontjudgechallenge pic.twitter.com/eXm6BC5q5a