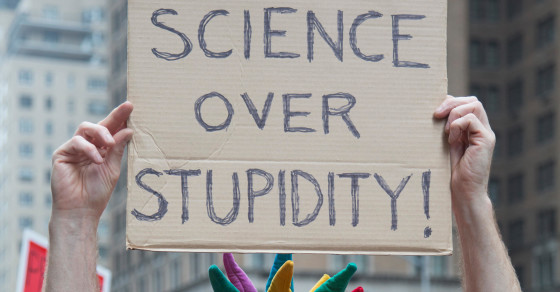 How Race and Gender Shape Scientific Beliefs In Unexpected Ways
By Joshua A. Krisch

How Race and Gender Shape Scientific Beliefs In Unexpected Ways

Your race, gender and politics may be the biggest determinant of your scientific beliefs

Science is a battleground. Whether it’s anti-GMO activists yelling at vaccine truthers, or pro-climate pundits marching alongside anti-vaxxers, entire fields of scientific inquiry are now up for grabs in the realm of public opinion. Race, religion, gender and education play a role in shoving us toward one end or another of most scientific (and political) debates but, according to a new Pew Research study, it’s often more complicated than that.

More Study: Most People Think Scientists Are Full Of It
​

Nonetheless, sometimes the data turn out exactly as one would expect. When it comes to climate change, for instance, the study found that older, conservative U.S. citizens tend to be skeptical that the planet is irreversibly warming due to human activity. Meanwhile, younger, liberal voters are worried about climate change and advocate interventions to save the planet from its inhabitants.

On other issues, there are pleasant surprises. When it comes to vaccines, the vast majority of Americans from all walks of life support the science (which, at this point, is so well-established that it’s silly to even discuss) and believe that vaccines are safe. See? Occasionally, science wins.

Sometimes the study even hints to cultural baggage—and dark times during America’s past. Although most Americans are skeptical of experimental drugs, for instance, the Pew study found that blacks are particularly uneasy around untested medications. Recalling the spectre of the infamous Tuskegee experiments (and the long, sordid history of corrupt white scientists conducting experiments on unsuspecting black people) it’s perhaps understandable why less that 40 percent of blacks are in favor of untested, experimental drugs showing up in the marketplace.

The study suggests that, on some issues, all Americans basically agree. Pesticides, for instance, were almost universally vilified by participants in the Pew study. But even when we all agree, the data can still have a few interesting twists and turns. For instance, men and women were on the same page for almost every scientific subject, but when it came to pesticides in food, women were far more wary of the chemicals than men.

And then there’s the issue of GMOs. As Vocativ has discussed at length, the science shows unequivocally that GMOs are entirely safe for human consumption. In a bemusing twist, the Pew study confirmed that most Americans disagree with scientists on this issue—but the more educated and knowledgeable you are about science, the more likely you are to believe in GMO safety.