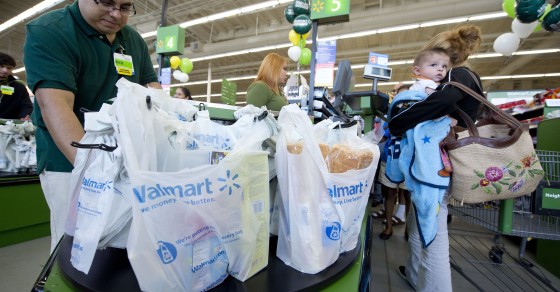 Debunking The Argument Against The Plastic Bag Ban
By Sarah Kaufman

Debunking The Argument Against The Plastic Bag Ban

Hawaii made headlines on Wednesday when it became the first state to ban the use of plastic bags in grocery stores, but do plastic bags really deserve such a bad rap?

North America-based paper and plastics manufacturer NOVOLEX created an online marketing strategy called “Bag the Ban,” which attempts to debunk the idea that plastic bags are bad for the environment. Search Google for “plastic bag ban” and the first result is  NOVOLEX’s infographic filled with compelling statistics that argue plastic bags are benign.

Fact checking the argument that plastic bags aren’t as bad as we think does not reveal black and white results. NOVOLEX is correct in that plastic shopping bags make up only 0.5 percent of the U.S. municipal waste stream, according to statistics from the Environmental Protection Agency. But a closer examination of EPA numbers shows that the actual weight of these plastic bags is astronomical. Approximately 3.37 million tons of plastic bags, sacks and wraps were discarded in the municipal waste stream in 2012 alone. That’s the weight of 450,000 elephants in plastic bags alone wasted on the earth.

NOVOLEX also claims plastic bags are “100% reusable and recyclable.” While plastic bags are often reused to collect animal waste and things of the sort, only below 14 percent of plastic bags, sacks and wraps were actually recycled in 2013. NOVOLEX recommends putting plastic bags in the recycling bin, but only a select few communities recycle them. Plasticfilmrecycling.org has a comprehensive location search of sites that recycle dropped-off plastic bags.

Even if the plastic bags are reused, they still end up lying in our landfills and oceans somewhere… forever. As Vocativ reported in February, a study revealed that humans dumped around five shopping bags full of plastic for every foot of coastline in the world in 2010. The 8 million metric tons of plastic that is scattered across the ocean not only forms ocean garbage patches that look like little mounds of floating trash, but it also breaks up into tiny pieces of plastic that are small enough to be ingested by fish and endanger the ecosystem.

Hawaii is not alone in the ban. Dozens of counties and several states across the U.S. and at least 19 countries have implemented ordinances to reduce plastic bag usage in recent years.

Finally, We Know How Much Plastic We Toss Into The Ocean (Vocativ)
Where Did All Of The Ocean’s Plastic Go? (Vocativ)