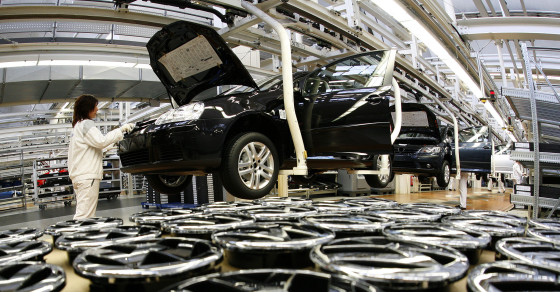 Volkswagen Robots Are Not Rising Up To Kill Humans

A Volkswagen worker was tragically killed by a robot, but his death doesn't mean killer robots are going to take over the world

A hysterical conversation about fatality rates in the car manufacturing industry kicked off Wednesday night after a reporter tweeted an inadvertently sensational headline about the death of a Volkswagen worker at the hands of a robot.

A machine struck a 21-year-old worker in the chest at a Volkswagen plant near Kassel, Germany on Wednesday. The worker later died of his injuries. Financial Times reporter Sarah O’Connor set off a Twitter firestorm when she tweeted her article along with the headline, “A robot has killed a worker in a VW plant in Germany.” Due to the similarity of her name to Sarah Connor, a primary character in the robopocalypse Terminator movies, hundreds of people joked that life was imitating art, and that the machines were starting to turn on humankind.

Thankfully the opposite is true—so far. The motor industry has led the way in automating manufacturing, and fatality rates have declined because of robots, according to U.S. government statistics. There were just nine fatal injuries in 2013 from either motor vehicle or motor vehicle parts manufacturing, down by half from 2003, 10 years before. In the EU, fatality rates in the manufacturing industry consistently declined from 1998 to 2007, the latest year with data available from Eurostat. The fatality rate was 0.9 per 100,000 employees in 2013, according to U.S. government data. You’re far more likely to die working in a bar, where the death rate is 16.4 per 100,000 employees, The Financial Times reported.

In a statement Wednesday, Volkswagen said the machine that killed the worker was older than the ones the company is currently working to install. Workers are not supposed to be inside the cages which house the robots, as the deceased worker was.

@sarahoconnor_ Sigh. I've never even watched the films. Now my feed is full of people tweeting me about skynet.