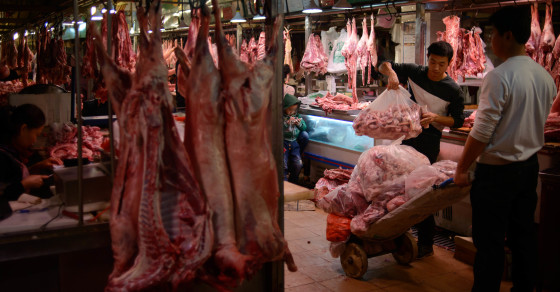 How Long Can Meat Stay Frozen? A Lesson From China’s Meat Smugglers
By Joshua A. Krisch

How Long Can Meat Stay Frozen? A Lesson From China’s Meat Smugglers

China's black market meat seems to have spoiled. How long can meat stay frozen without killing you?

News broke on Wednesday that a Chinese sting operation had seized truckloads of rancid meat destined for stores, some of which had been frozen and thawed repeatedly since the 1970s. “It was smelly. There was a whole truck of it,” one official told China’s state-run newspaper.

“I nearly threw up when I opened the door.”

While we’re fairly grossed out by meat that hasn’t been fresh since 8-track tape players were hip, it seems worthwhile to revisit the science on the frozen food. How long can meat stay frozen? Can you eat decades-old meat?

More The Houses Where China's Babies Are Abandoned
​

The U.S. Department of Agriculture says all food stored at zero degrees Fahrenheit is safe to eat—indefinitely (coincidentally, that’s the normal temperature for domestic freezers in the U.S.). At very low temperatures, the molecules and enzymes that drive dangerous bacteria move so slowly that the offending microbes either die or lay dormant. So when you thaw the meat days—or decades—later, the pathogens won’t get a chance to bounce back—as long as you eat it within a few hours. The USDA says that potentially harmful bacteria, yeasts, molds and even parasites like trichina (found in pork) can be foiled by zero degree freezing.

But that comes with a serious caveat—you have to keep it uniformly frozen at exactly zero degrees the whole time. If you (or Chinese smugglers) can keep your steaks strictly frozen at all times, then Mao-era meat would be totally safe. But the temperature inside your private freezer fluctuates quite a bit, and smugglers aren’t known for diligent maintenance of their cargo. Although cooking destroys most pathogens, the USDA warns that repeated freezing and thawing can rot meat long before you get a chance to cook it. In a word, if you want to hand down a well-marbled ribeye to your grandkids, don’t freeze it at home.

So that’s that. Of course, safe doesn’t mean delicious. Decades-old frozen meat is bound to be rubbery and freezer-burned, to say the least. Here’s a chart how long meat products stay tasty in the freezer: