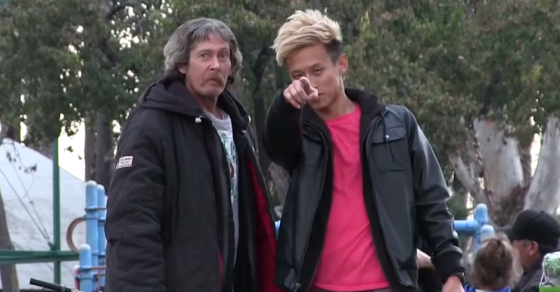 The homeless man who starred in a feel-good video that racked up 39 million views worldwide, but which later generated controversy over accusations that the creator had staged the whole thing to turn a tidy profit, has died, officials say.

Kenni Thomas Nickel, who went by “Thomas” in the video made by YouTube star Josh Paler Lin, died of chronic alcoholism and natural causes on May 28, a Los Angles County coroner spokesman said. He was found unresponsive behind an alley and was listed as homeless at the time of his death, the spokesman said.

In the controversial video, released just before Christmas, Lin purports to give Thomas $100 and then secretly follows him around, expecting that the homeless man will buy booze. Thomas walks right into a liquor store. But instead of alcohol, Thomas buys food to feed to hungry people.

As the video touched and moved millions around the world, Lin, an Internet prankster known for his sex-in–the-bathroom and mafia-inspired gags, launched an Indiegogo campaign to “help Thomas get a fresh start,” which netted more than $146,000. But questions plagued Lin and the authenticity of his video. First, he refused to let Thomas speak to the media and couldn’t answer specific questions about the fundraiser. Later, an eyewitness told Vocativ that Lin had staged the video with Thomas. By February, the Internet prankster still had not given Thomas the $146,000.

“I would like to send my deepest condolences to Thomas and his family,” Lin wrote on his Facebook page Tuesday night. “He was a kind and loving man. RIP my dear friend. #RIPThomas.”

Lin added: “NOTE: Ignorant and disrespectful comments will not be tolerated here.”