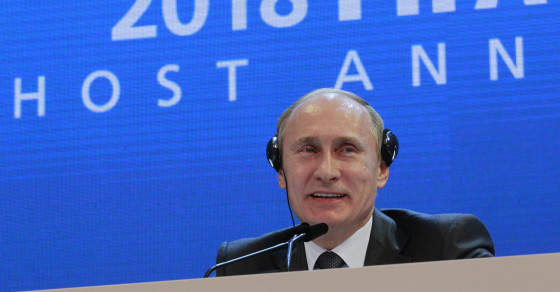 After a fresh new round of sanctions, the Russian government slashes excess costs for the 2018 games

Moscow announced new cuts to its budget for the 2018 FIFA World Cup games after the European Union on Monday extended its economic sanctions against Russia for another six months. The cuts bring up the issue of just how much the Russian economy is struggling in the wake of those sanctions over the war in Ukraine.

The World Cup budget was cut by 30 billion rubles ($560 million USD), bringing the budget down to 631.5 billion rubles, according to a statement issued by the government on Monday. Sports Minister Vitaly Mutko gave no reason for the cuts when speaking to the press. He said the building and renovation of the stadiums would continue along the same path, but that “excess hotels” would be cut.

The government announced in May of 2013 that it planned to spend 660 billion rubles, or what was then approximately $21 billion USD, on the games, Russian publication Vedomosti reported. The ruble plummeted to almost half its value against the dollar since 2013. That means the country’s FIFA budget in USD has plummeted to 43 percent of what it was in 2013, from $21 billion to $11.8 billion USD.

FIFA is under international scrutiny after Swiss authorities arrested several FIFA officials in connection with a federal corruption investigation last month. Russian president Vladimir Putin has countered the investigations with confidence that Russia will proudly host the games in 2018 despite allegations against officials. “We won in a free fight and we are going to host the World Cup,” he told Reuters in St. Petersburg on Saturday.