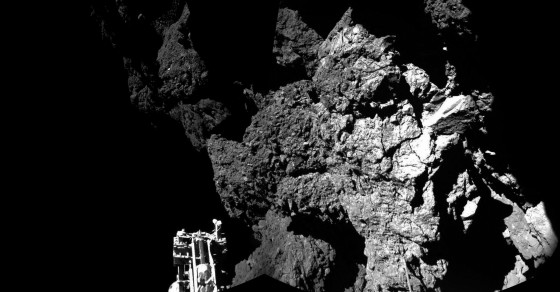 Here Are The Household Items The Philae Lander Can Power

It's cuteness rating is immeasurable, but at 24 Watts, Philae Lander's electronic power is limited

It has become The Little Space Probe That Could. The Philae Lander awoke from a seven-month nap aboard the comet 67P on Sunday with just enough energy to send a message to its mothership Rosetta–or power a 12″ black and white television set, 21 electric toothbrushes or six fish tanks.

The European Space Agency said its $250 million probe, which the internet has decided is adorable, has 24 watts available, which would also be sufficient to power three clock radios, an electric shaver or a 75-watt CFL lightbulb.

Philae had access to a 1000 watt-hour non-rechargeable battery after landing last November, the equivalent of a 100 watt bulb running for 10 hours. After that battery was depleted, a second, solar-powered 140 watt-hour rechargeable battery was supposed to kick in–but Philae landed in the shadow of a cliff, went into forced hibernation, and the internet shed massive virtual tears.

Having had several months to move a little closer to the sun, Philae snapped out of it yesterday and contacted Rosetta, which sent a message on its behalf through four billion miles of space back to Earth. Just two months remain until the comet reaches its closest point to the sun and scientists attempt to use the resilient little space probe to further study activity on the giant terrestrial piece of rock.