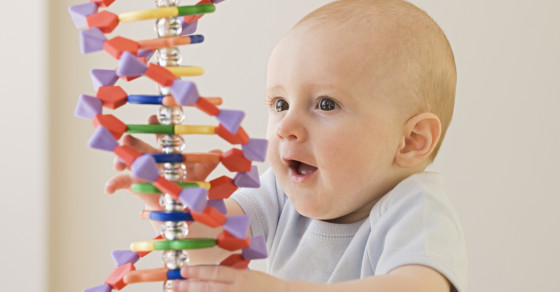 Baby Genius Could Be An Early Sign Of Autism
By Joshua A. Krisch

Baby Genius Could Be An Early Sign Of Autism

Infants with superior perception for details may be more likely to develop autism later in life.

People with autism tend to see the world differently. But until now, researchers focused on autism as a social or language deficit, rather then exploring the root of the diagnosis—perception. In a new study published in Current Biology, scientists tracked infants’ eye movements and found that babies with superior visual perception were more likely to develop autism later on. The findings suggest that unusual perception is linked to autism, and open the door to future screening tests that make use of eye-tracking technology to diagnose and treat autism at an even younger age.

For the study, researchers tested 109 9-month-old infants (87 of whom had an older sibling with autism), by showing them diagrams of shapes and letters with one standout characteristic, such as a circle of X’s with one “S.” Infants naturally focus on anything that stands out in a diagram but, using eye-tracking technology, the researchers found that some infants managed to zero in on the different letter faster than others.

Five months later, and then once again at 2 years of age, the researchers tested this same group of children and recorded how long it took them to visually capture the odd man out. The results show that infants who demonstrated superior visual perception early in life were more likely to develop autism later on—supporting the theory that, even as children, people with autism may literally see the world differently.

Early intervention is extremely important for children with autism, and screening tests based on these results could help us detect the disorder even earlier. But the authors say their findings also may help us address the needs of autistic adults. We hope this study and others will bring autism research questions closer to the needs of those directly affected,” said Teodora Gliga, professor at the University of London and coauthor on the study, said in a prepared statement.

The Autistic Child: More Than Meets The Eye (BrainBlogger.com)
Boy Asks Australian Government Not To Deport His Autistic Friend (Vocativ)