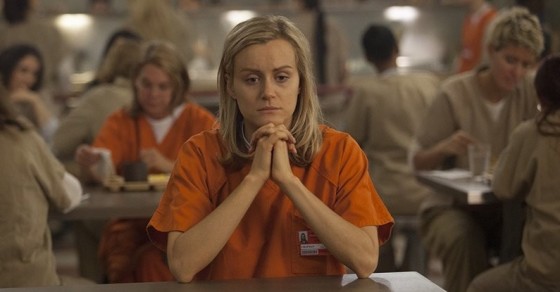 Will you find offenders like Chapman, Crazy Eyes and Pennsatucky serving prison time?

It turns out that Orange Is The New Black is a pretty accurate depiction of real life prison in more ways than one.

The popular Netflix original, which premiers on Friday with its third season, is based on Piper Kerman’s real-life experiences inside a female minimum security prison in Danbury, Connecticut. But that’s not the only way the series imitates life. A Vocativ analysis shows that Kerman’s fictional doppelgänger Piper Chapman, and her fellow inmates Tiffany “Pennsatucky” Doggett and Suzanne “Crazy Eyes” Warren share characteristics with real women in the US prison system.

The show’s fictional Litchfield Penitentiary in upstate New York gives a pretty accurate reflection of the variety of races that end up in women’s prisons. Of 15 inmates who feature prominently in season three, eight are Caucasian and five are African-American. In 2010, black women were three times more likely than white women to become incarcerated–but the rate of imprisonment for Caucasians surged 38 percent during that decade.

Chapman and her on-again-off-again lover Alex Vause were put away for drug trafficking–the same reason around a quarter of the one million women in US prisons in 2010 had been locked up. And between 30 and 60 percent of women have been conservatively estimated to engage in lesbian relationships while in prison.

Like Pennsatucky, who believed God had given her the right to beat the crap out of her fellow inmates, almost 36 percent of real-life offenders were incarcerated for violence. And take emotionally unstable Crazy Eyes, whose desperation for affection manifests itself in an unhealthy obsession: She’s an extreme example, but nearly three quarters of women in state prisons had symptoms of a current mental health problem in 2004.

It’s rumored that a major character will give birth in season three. One in 33 women admitted to federal prisons are pregnant, and approximately 2,000 babies are born to incarcerated women annually. Like another character separated from her newborn in season one, most incarcerated mothers are only allowed 24 hours with their babies before being returned to prison.

‘Orange Is the New Black’ Author Rallies for ‘Ban the Box’ Bill (Observer)
Anti-Gay Hate Crimes Are Down — Or Are They? (Vocativ)