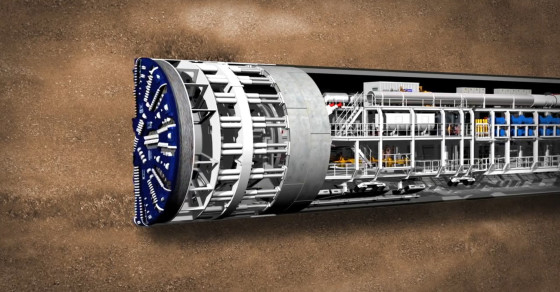 The ‘Royal’ Monster Machines Under London Have Surfaced

After three years beneath the surface of one of the world’s busiest cities, gargantuan monsters of the deep have emerged from captivity. The giant-toothed diggers named after members of the British Monarchy helped burrow a 26-mile hole underneath central London, all without tearing up streets through England’s capital.

The city purchased eight of the $15 million tunneling machines to build the underground stretch of its new Crossrail, a 73 mile railway line linking east and west Greater London that’s set for launch in 2018. All of the beasts have completed their duty as of Thursday, including two affectionately named after Queens Victoria and Elizabeth.

The machines were built by German TBM (tunnel boring machine) manufacturer Herrenknecht, but their drilling technique was actually pioneered in Japan in the late 1970s. It works by carefully compacting extracted soil to a pressure which equals that of the surrounding soil and groundwater, which lowers the risk of the tunnel collapsing.

The TBM uses collected data to regulate its thrust and the speed of the screw conveyor, which removes soil from the cutter head. Pre-cut segments of concrete are then ferried towards the front of the machine, picked up by massive hydraulic arms and moved into place to form the tunnel lining. Once a 360-degree ring of concrete is fitted, grout is injected, and the TBM moves onwards.

It all sounds pretty cool, but it’s a slow process, having taken almost exactly three years to burrow through 26 miles of London dirt and stone. Watch the video below to have a look at the machines, which sound like something out of a science fiction movie.