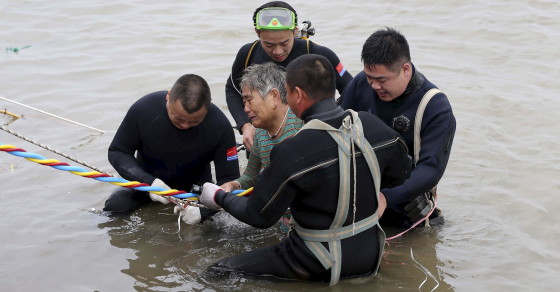 How Long Can You Survive In An Underwater Air Pocket?
By Joshua A. Krisch

How Long Can You Survive In An Underwater Air Pocket?

Only a handful of survivors have been rescued from the cruise ship disaster on the Yangtze River. Will more survivors emerge from underwater air pockets?

Rescue workers are scouring the Yangtze River for survivors from the Eastern Star cruise ship, which capsized on Monday night with roughly 400 people on board. Although only 14 survivors have been found, China remains hopeful that underwater air pockets within the ship may be keeping some passengers alive. In fact, at least two survivors have already been rescued from air pockets.

The Chinese diver behind both of those rescues told CCTV: “the bottom of the ship had a layer of air cushion, which was 1.5 to 2m thick [roughly 5 to 6 feet].” But how long can you survive in an air cushion?

TL;DR: depends on the size (and a bunch of other factors) but about 80 hours.

In an air pocket, the first problem is carbon dioxide build-up. Every time you exhale within the bubble, you release toxic carbon dioxide into a closed space. When carbon dioxide levels reach 50,000 parts per million, you’ll begin to feel sort of drunk. “At 70,000 parts per million, you lose consciousness pretty rapidly,” Eric Hexdall, a nurse and clinical director of diving medicine at the Duke University, told National Geographic. Hexdall calculated that, in an air pocket the size of a U-Haul moving van, it would take about 79 hours before you lost consciousness.

The armchair science of air pocket survival came into its own in 2013, when a bunch of physicists got together online to try to figure out what size an air bubble would have to be to sustain life indefinitely. Although the math in that forum gets pretty dense, here’s the general idea: humans need about 10 cubic meters of air per day and, for every 10 meters below the surface of the water, that number decreases. 100 feet below the surface, for instance, the average human only needs about two cubic meters of air per day.

To survive 100 feet underwater for three days, then, you’d need about six cubic meters of air—or a bubble about the size of a small dumpster.